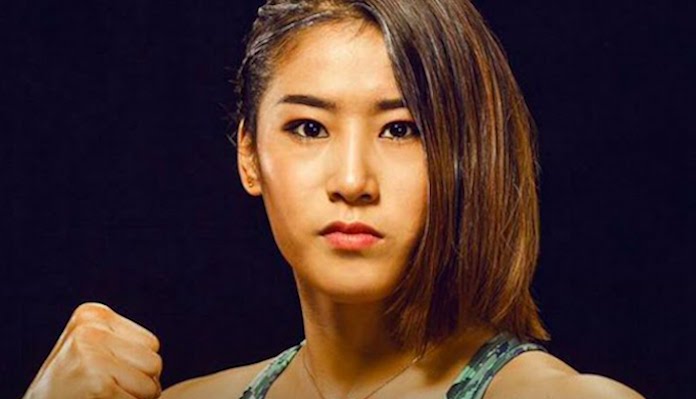 You have to scroll a long way down Weili Zhang’s 20-1 record to find her only loss. That solitary L occurred all the way back in 2013, in her very first fight, when she was defeated by a woman named Meng Bo at a regional mixed martial arts show in Xuchang, China.

The bout was Meng’s first, too. Although she and Zhang began their careers on the same night, the pair have had traveled different paths in the years since.

Today, Zhang is the UFC strawweight champion—the first and only Chinese champ in the promotion’s history. Meng, on the other hand, recently debuted on the ONE Championship roster with a destructive, first-round win over Laura Balin.

As Zhang gears up to defend her UFC belt against the former champion Joanna Jedrzejczyk in the co-main event of UFC 248 this weekend, Meng looked back on the night she defeated the UFC champ.

Interestingly, she says the bout was more of an amateur contest—which could conceivably mean Zhang is actually undefeated as a professional.

“We were both at the start of our career and we were both young,” Meng told BJPENN.com. “It was the first MMA contest for both of us, and there were only two rounds. [It was] not as professional as people think. It was an amateur promotion and we were both amateurs.”

Meng defeated Zhang by decision that night, but other than the thrill of winning her first match, doesn’t remember much about tangling with the future UFC champ.

“It’s been five or six years,” she said of her fight with Zhang. “I can’t really remember it clearly. We were like kids, and I didn’t fear anybody at that time. It’s not like fighting in a worldwide promotion where you need to do the research of your opponent. I just didn’t care who she was and, to be honest, I was not so impressed with her performance.

Despite not giving Zhang much thought after their match, Meng started to pay attention to her former rival as she rose steadily up the ranks.

“I followed some of her fights because we are a tight community,” she said, referencing the close-knit nature of the Chinese MMA scene. “Through her success I think one thing we learned is that, both hard work and opportunity can build a champion. Sometimes you can’t succeed no matter how hard you work without opportunity, but sitting and waiting for luck also won’t work. Weili is a lucky girl—but she works as hard as a world champion.”

Given that Meng remains the only woman to defeat Zhang, fans will inevitably speculate how a rematch between the pair might go—particularly as Meng continues to notch victories in ONE Championship.

Meng is confident she’d hand Zhang a loss, just like she did the first time they met.

“If we face each other again, I will be as confident as I was the last time we did.”

Meng also believes Jedrzejczyk stands a chance of beating Zhang this weekend, and is very excited for the matchup.

“It’s hard to predict the outcome between these two because they both have advantages in different areas,” she said. “It’s going to be the fight of the century for women’s MMA.”

While Meng Bo is best known as the woman behind Weili Zhang’s only loss, there is certainly more to her career than that. She’s accomplished a lot on the Asian MMA scene, and hopes to make a big splash in ONE Championship.

She was scheduled to take on ONE stalwart Mei Yamaguchi at the recent ONE: King of the Jungle card, but was unfortunately forced out of the bout due to complications stemming from the novel coronavirus outbreak in her native China. She’s disappointed things turned out the way they did, but is eager for the change to compete again — whether it’s against Yamaguchi or somebody else.

“I’m pretty upset about the cancellation of the Singapore bout with Mei,” she said. “But I believe we will face each other in the near future. She’s a necessary step in my way to the mountain top.

“As soon as our motherland defeats the coronavirus, I will be back in the ONE Circle right away.”

As Meng suggests, the goal is to capture gold in the ONE Championship atomweight division. She’s confident she’ll accomplish that goal and relishes the possibility of representing Chinese MMA the way Weili Zhang has in the UFC.

“I will become the world champion,” she said. “I will take on that goal one step at a time.

“It would not only be the success of my personal career as an athlete, it also means the rise of MMA in the biggest market of Asia—putting Chinese MMA on the map.”