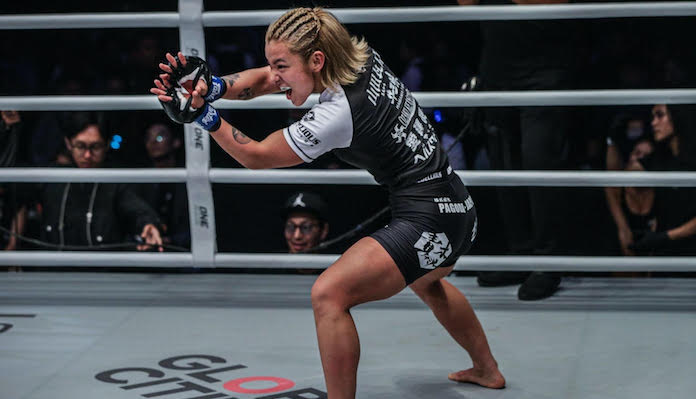 Itsuki Hirata, one of the brightest prospects on the ONE Championship roster, is days out from a potentially career-altering fight.

The 21-year-old will collide with Miku Nakamura in the main event of Road to ONE on February 22 in her native Tokyo. A win in this matchup could launch her into the anticipated ONE Atomweight World Grand Prix, and open the door to fights with some of the promotion’s fiercest fighters.

It’s an opportunity Hirata is grateful for—particularly in the midst of the coronavirus pandemic, when many athletes are struggling to find competition.

Hirata, a decorated Judoka, is widely considered a future champion among ONE Championship fans, but she expects to have her hands full against Nakamura.

“Based on her fights that I’ve seen, she gives me the impression of a strong striker,” Hirata said, sizing up her rival. “Without losing focus on grappling in any way, I’ve been stepping up my own game in terms of striking. I’d like to be able to show that in the fight.”

If Hirata is able to defeat Nakamura in Tokyo, she’ll be 4-0 as a pro mixed martial artist, and will be difficult to deny a spot in the upcoming Grand Prix. She recognizes the stakes of the matchup, but exudes the kind of quiet focus one doesn’t generally expect from such a young fighter.

“I definitely can’t lose here,” she said. “I’ve decided that this fight is going to be a stepping stone towards the ONE Atomweight Grand Prix. This is going to be my chance to move closer to the championship.

“I can’t just win,” she added. “The contents of my fight itself and my performance itself are going to make a great impact on whether or not I get chosen to be in the Grand Prix.”

The lineup for the ONE Atomweight Grand Prix has not yet been set, but the expectation is that it will feature contenders like Denise Zamboanga, Meng Bo, Lin Heqin, Mei Yamaguchi, Alyona Rassohyna and Stamp Fairtex, in addition to handful of unranked fighters like Hirata.

Hirata is adamant that nobody in the ONE atomweight division should be underestimated, but would love the chance to test herself against Meng—the only fighter to beat UFC champ Weili Zhang—in the opening round.

“We have really been focusing on Meng Bo, especially following her last performance [against Samara Santos],” Hirata said. “I think we would have a great matchup, especially considering her stamina and her striking.”

The ultimate objective, of course, is earning a crack at ONE atomweight champion Angela Lee, who is currently awaiting the birth of her first child.

“I know I’ll get closer to a title shot or a chance to fight Angela Lee after I go against everyone in the Atomweight Grand Prix,” she said.

Hirata has made no secret of her admiration for Lee, but relishes the opportunity to challenge one of her idols, and believes she has the skills to pull off a title-winning upset against the champ.

“I really respect her as a person and an athlete,” Hirata said of Lee. “She’s somebody that puts all her love into the sport. I respect her and look up to her a lot.

“I think if I were to compete with Angela, the fight would go on the ground a lot, but I have confidence in my striking ability and definitely want to have a fight standing up if I can,” she added.

One way or another, Hirata is determined to live up to the expectations of her growing throngs of fans and get her hands on a ONE Championship belt.

“I want to become the champion,” she said. “Recently the atomweight division has become more and more stacked and competitive, and I understand that I need to continue training and stay focused.

If Itsuki Hirata wants to tangle with the likes of Meng Bo and Angela Lee, of course, she’ll need to get by Miku Nakamura at Road to ONE. She intends to do just that in emphatic fashion

“As much as I want to make it a striking match, I want to focus on winning,” she said, implying that her high-level grappling could be the key to a big victory. “I want to leave an impact and win in an overwhelming manner.”