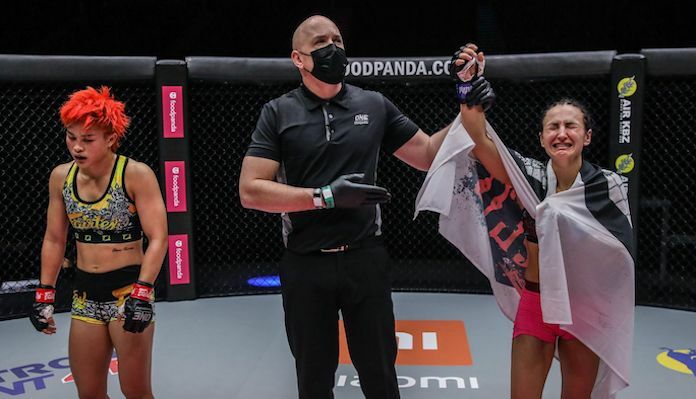 On Friday, ONE Championship promoted its third exciting event in many weeks with ONE: Unbreakable 3 in Singapore.

This ONE card was headlined by a mixed martial arts bout between former ONE atomweight Muay Thai and kickboxing champion Stamp Fairtex and debuting Ukrainian Alyona Rassohyna, an armbar specialist with an 83% submission rate.

For most of this fight, Stamp looked to be in the driver sear, out-striking Rassohyna by decision as expected, but also controlling the majority of the fight’s grappling exchanges, flaunting some major improvements to her MMA arsenal in the process. In the waning moments of the fight, however, Stamp dove into a guillotine choke, and with just seconds left on the clock, she appeared to tap.

Immediately after her apparent tap, however, Stamp was celebrating as though she would win a decision, which gave cage-side commentators and many viewers the impression that she didn’t mean to tap, and that she believed the fight was over.

Outside of that fight, the ONE: Unbreakable 3 card was co-headlined by a bantamweight clash between the division’s No. 2-ranked contender Shoko Sato and underdog Brazilian striker Fabricio Andrade, who ended up springing the upset with a decision win.

Other highlights of the card included big wins from Ryuto Sawada, Kang Ji Won, and Sanford MMA’s Tial Thang. See the full results of this ONE Championship card below:

Stamp Fairtex defeats Alyona Rassohyna via submission (guillotine choke) at 4:53 of round three

Heavyweight mixed martial arts
Kang Ji Won defeats Mehdi Barghi via TKO at 4:50 of round one

Lightweight
Ahmed Mujtaba defeats Rahul Raju via knockout at 0:56 of round one

Bantamweight
Tial Thang defeats Paul Lumihi via TKO at 2:25 of round two