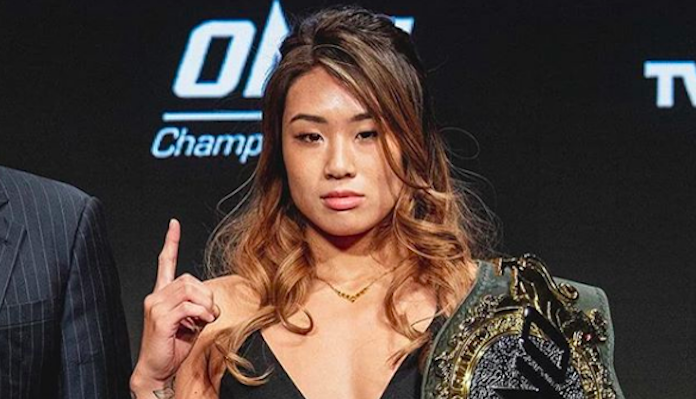 In the animal kingdom, there are few creatures more dangerous than a protective mother. If ONE atomweight champion Angela Lee is any indication, that rule also applies in mixed martial arts.

Lee, who has held the ONE atomweight belt in a vice grip since 2016, is expecting her first child in April. While her pregnancy will keep her out of competition for some time, she plans to return better than ever once her baby has arrived.

“I do think that it might give me a bit of extra motivation, something more to fight for, and I might even be more vicious than ever,” Angela Lee told BJPENN.com from her home in Hawaii, forecasting how becoming a mother will change her as a fighter. “I’m looking forward to the journey back and getting back in there because I really love this sport.”

While Lee awaits her baby, ONE Championship plans to promote an exciting atomweight grand prix to keep the division moving in her stead. The winner will receive an enviable grand prix title, but Lee does not intend to part with her undisputed strap while she’s away.

“That’s the plan,” Lee said when asked if she’d be hanging onto her title. “I know they announced the grand prix, and I think that’s just perfect because there are so many really good top contenders in the atomweight division.

“I’ll be watching very closely and paying attention to how everything plays out.”

Lee was briefly expected to defend her title against Filipina contender Denice Zamboanga earlier this year, but that plan fell through when the coronavirus pandemic began to sweep the planet. The champion is disappointed not to have had the opportunity to compete in 2020, but she was admittedly skeptical of Zamboanga’s credentials, and views the upcoming grand prix as a chance for her rival to really earn the opportunity to fight for gold.

“Although Denise had that great fight with Mei [Yamaguchi], her other two wins [in ONE], I mean… I don’t think they really convinced me that she deserves to be the No. 1 contender,” Lee said. “I know a lot of people are upset about it. They’re talking about it saying she deserves a shot at the belt, but she didn’t do anything to earn the belt in my opinion.”

Zamboanga winning the upcoming grand prix, of course, is no certainty. The atomweight division is among the best in ONE Championship.

Beyond Lee and Zamboanga, the weight class is home to promising prospects like Stamp Fairtex, Lin Heqin and Itsuki Hirata, experienced veterans like Meng Bo and Mei Yamaguchi, and under-the-radar talents like Bi Nguyen and Jihin Radzuan.

Having already sized up the likely participants in the atomweight grand prix, Lee says she has no idea who will emerge victorious, but is excited to watch it all unfold.

“I’m very excited to see how it goes,” she said. “It’s really hard to say [who will win], but I think that’s what makes a grand prix, tournament-style setting like this so exciting. Anyone can take it. It gives everyone fair ground. So I’m excited to see what the match-ups look like, because I think that will determine how it’ll go.”

The winner of the atomweight grand prix will not only leave the cage with a glimmering belt slung over her shoulder, but with an undeniable claim to a crack at Lee’s undisputed strap.

The champ has no objections to fighting the winner of the tournament, and believes she could do so as soon as the last quarter of 2021.

“I’m not sure how my body will be after the pregnancy, but I’m hoping to stay in shape while I’m still pregnant,” she said. “Give me about six months [after] and I should be ready to fight by October, November, December, 2021.”

Lee’s skeptics believe that motherhood could spell the end of her time as a top fighter. The champion has heard the barking of her naysayers and begs to differ.

She notes that she’s still only 24, and promises that she still has plenty to give to her sport.

“I really believe everything happens for a reason and I was in the best shape of my life before I found out I was pregnant,” Lee said. “I was getting ready to fight in October, and I think having this baby is just going to fire me up that much more. Like I said earlier, you might see just a completely different animal in the cage when I get in there.

“I just feel like there’s so much more to learn and so much more to growing to do as a martial artist and as a fighter. I’m looking forward to that. So for all those people who say, ‘oh, she’s not going to be the same, she’s done.’ You know, you guys can just shut it because I’ll prove you wrong.”