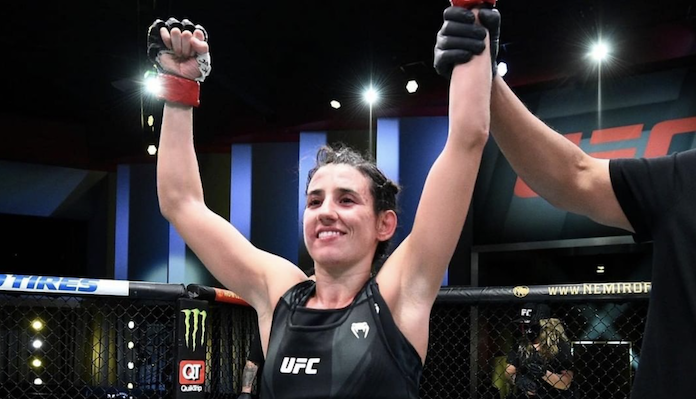 Rodriguez is coming off of a big win over Michelle Waterson in her last outing and beat Amanda Ribas by knockout before that, so she’s one of the hottest fighters at 115lbs right now. Similarly, Dern has been red hot as of late with a four-fight win streak including a submission over Nina Nunes in her last fight. With both Rodriguez and Dern ranked in the top-10 of the division, UFC president Dana White recently said that the promotion was planning on having these two women headline a UFC Fight Night card on July 21.

However, it doesn’t appear as though the Rodriguez vs. Dern fight will happen as scheduled. Speaking to AG Fight, Rodriguez said that she declined to fight Dern in July because she wants a full camp for this fight so she wants to return in the fall, instead.

“The UFC offered us to Mackenzie for July, but I had already warned that we wanted to fight in September or October. As I saw that she wants to fight before, I believe that our fight may not even happen for now. And, of course, after catching a fight (against Michelle Waterson) with 11 days notice, we talked to my trainer Marcio Malko and decided that we would do our complete planning for the next fight, because we know that it is getting closer and closer to the belt and we don’t want to miss this opportunity when it comes,” Rodriguez said.

“So, this year we are going to train as if it were for the belt. If he comes, how good, perfect, if he doesn’t come we will have the next fight as if it were to be able to get closer and closer to him. We always want to show evolution with each fight, and for that, we need a complete camp. I believe it will be worth waiting for a while to see me return to the Octagon.”

Do you think Marina Rodriguez has what it takes to make a run for the UFC women’s strawweight title?