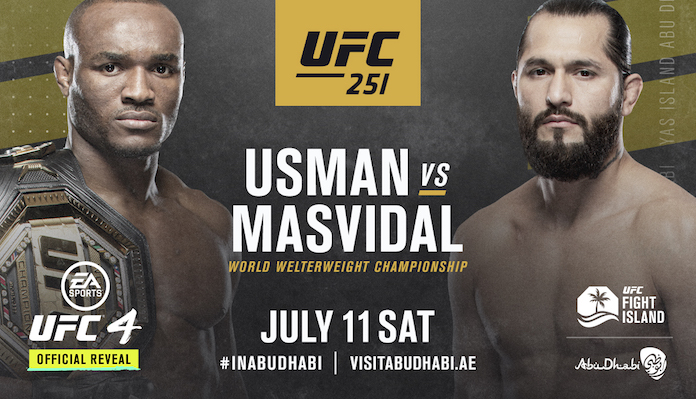 Usman (16-1 MMA) will be looking to defend his welterweight title for the second time when he squares off with ‘Gamebred’ this evening. In his most recent effort at UFC 245, ‘The Nigerian Nightmare’ scored a fifth round TKO victory over Colby Covington to retain his championship.

Meanwhile, Jorge Masvidal (35-13 MMA) will enter tonight’s UFC 251 headliner on a three-fight win streak, his latest being a TKO victory over Nate Diaz at UFC 244. Prior to defeating the ‘Stockton Slugger’, Masvidal was coming off of back-to-back brutal knockout wins over Ben Askren and Darren Till respectively.

Also featured on tonight’s UFC 251 main card is a bout between Jose Aldo and Petr Yan for the promotions vacant bantamweight title.

Aldo (28-6 MMA) will actually enter tonight’s Fight Island event on a two-fight losing skid. The former featherweight kingpin made his bantamweight debut at UFC 245, where he suffered a split decision loss to Marlon Moraes. However, many fans and analysts, including UFC President Dana White, felt that Aldo had clearly defeated Moraes and thus he was awarded an opportunity to fight for the vacant strap.

Meanwhile, Petr Yan (12-1 MMA) was also last seen in action at December’s UFC 245 event, where he scored a KO victory over MMA legend Urijah Faber. That win extended Yan’s current win streak to nine in a row, which includes victories over Jimmie Rivera and John Dodson.

Get all of tonight’s UFC 251 Live Results and Highlights below:

Petr Yan vs. Jose Aldo – Yan def. Aldo via TKO in Round 5

Amanda Ribas vs. Paige VanZant – Ribas def. VanZant via submission (armbar) in Round 1

Volkan Oezdemir vs. Jiri Prochazka – Prochaska def. Oezdemir via KO at :49 of Round 2

Makwan Amirkhani vs. Danny Henry – Amirkhani def. Henry via submission (anaconda choke) at 3:15 of Round 1

Who are you picking to win tonight’s UFC 251 contests? Share your predictions in the comments section PENN Nation!