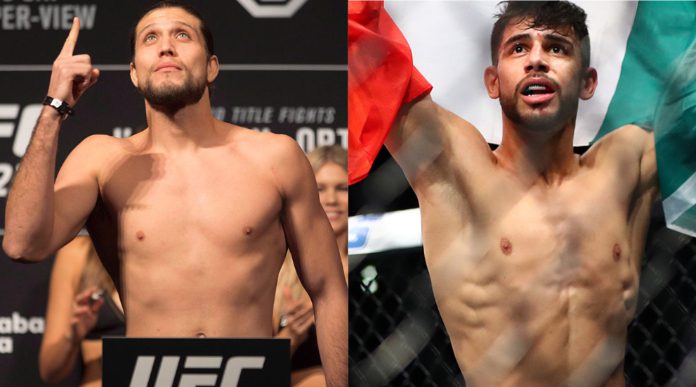 In the main event of UFC Long Island, a pivotal featherweight scrap headlines the card as top-three featherweights collide as Brian Ortega takes on Yair Rodriguez. Heading into the fight, Ortega is a -180 favorite while the Mexican is a +140 underdog on FanDuel.

Ahead of the fight, BJPENN.com reached out to pro fighters to get their prediction for the scrap. The majority of pros are leaning towards Ortega getting his hand raised and likely doing it by submission.

Jim Miller, UFC lightweight: That is a tough one, I’ll say Ortega but Rodriguez is super dangerous.

Billy Quarantillo, UFC featherweight: I think Brian Ortega gets it done. I expect it to be a very fun fight where his grappling is better an

Cody Brundage, UFC middleweight: I’m going to go with Rodriguez. He’s unorthodox and his striking is very solid. He will be able to stay out of the bad positions of Ortega and I don’t think Ortega can match Rodriguez on the feet.

Jonathan Pearce, UFC featherweight: Brian Ortega. Max was able to get Yair down and if Brian does, he will get the submission.

Mario Bautista, UFC bantamweight: That’s such a good fight, I’m going to go with Yair and I think his movement and striking are too good for Ortega to get ahold of him.d Ortega’s striking has come far enough to hang enough with Rodriguez.

David Onama, UFC featherweight: I got Brian Ortega winning that one, he can hang with him on the feet, and then if it hits the mat he can submit him.

Orion Cosce, UFC welterweight: That will be a great fight. I will go with Ortega by submission.

Austin Lingo, UFC featherweight: I’ll say Rodriguez gets it done by decision or late stoppage similar to what Holloway did to him.