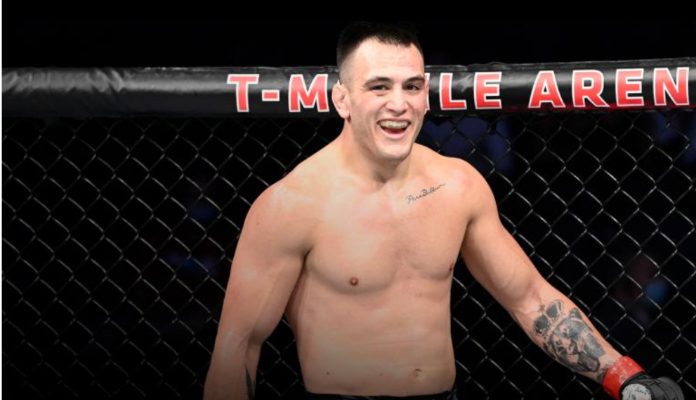 Cody Brundage was happy to shut up Tresean Gore.

Leading up to his UFC Vegas 58 fight, Brundage heard all the trash talk Gore was saying, and that included throughout fight week. However, Brundage just put his head down as he had all the confidence in the world he would beat Gore and was surprised the former TUF competitor didn’t come out more aggressive.

“I thought he would come out a lot quicker and up the volume, after all the flack he took in the Battle fight,” Brundage said on Just Scrap Radio on BJPENN.com. “He definitely turned up the volume but I was seeing everything and I made him miss. He landed like two shots to the head in the first round, but I know I have the ability to do things like that and I’m happy with it.”

Ever since the fight was announced, Cody Brundage says he felt disrespected by being the underdog and hearing all the talk that Tresean Gore would KO him. He also was annoyed with how Gore was acting throughout fight week and at the faceoff telling Brundage he will need to wrestle him, but the Factory X product believes he proved he is more than a wrestler.

“I try to be humble and I’m very genuine. Whatever I say is what I’m feeling and I felt disrespected leading up to this with people saying Tresean’s striking is on another level and he will KO me and if I can’t get him down it will be a long night for me,” Brundage said. “I just didn’t see it, man. In all the film I watched his striking looked good against regional-level guys. If you guys watch my first three fights, those are the guys he’s knocking out and I knocked them out in a minute and I’ve only gotten way better. I just feel my striking has gotten way better and even in the faceoff he said shoot all night and I’m gonna wrestle and I proved I don’t have to just wrestle.”

With the win, Brundage improved to 2-1 in the UFC, including winning his past two fights by first-round stoppage. However, he says he doesn’t care who is next as all he cares about is getting better and just stacking together wins.

“I don’t care who is next, I just want to get better. There are so many areas to grow and I’m just going to hide behind wins, I’m only three years as a pro, so I just want to keep getting better,” Brundage said. “I don’t care if top-15 is five fights away, I just plan to get through contracts and get more money.”

Although Brundage doesn’t care who is next, he says he hopes to return in November on the rumored Denver card.

“I’m ready whenever, I’m taking a little vacation and coaching so it will be a busy month for me. After that, who knows, hopefully, in November, I’ve heard rumors they are coming to Denver so I’d love to come to Denver,” Brundage concluded. “We will see, the UFC calls my managers and he tells me who and when. But, probably in a couple of months.”

Who would you like to see Cody Brundage fight next?