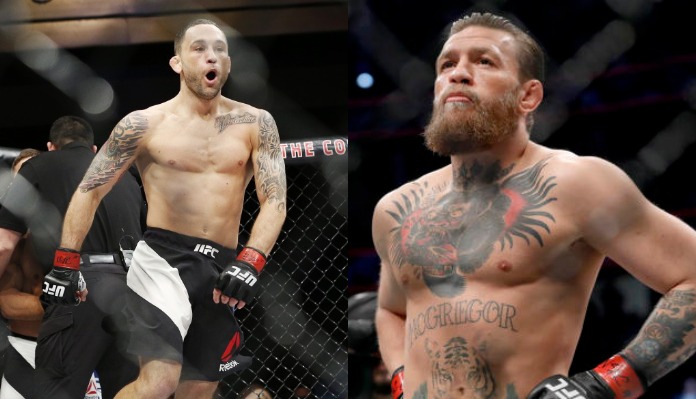 Frankie Edgar and Conor McGregor were linked to one another a couple of times but for whatever reason, it never came to fruition.

As McGregor was making his rise up the featherweight ranks, Edgar was a top contender and many figured they would fight. However, the Irishman faced Chad Mendes and Jose Aldo and then moved up in weight.

Yet, as McGregor was campaigning for a fight in 2019 he issued a respectful callout to Edgar who accepted. Unfortunately, Dana White and the UFC weren’t interested and now the future Hall of Famer doesn’t think the fight will ever happen.

“Of course it upset me. He is the most popular guy in our sport,” Frankie Edgar said of Conor McGregor on Just Scrap Radio on BJPENN.com. “Anytime you can get in the cage with someone like that you jump at the opportunity. I do think it is in the past, he is at 155, maybe even 170 if he fights Nate, I’m a couple of weight classes below.”

Part of the reason why it won’t happen is the fact Conor McGregor seems focused on the trilogy with Dustin Poirier. For Frankie Edgar, he believes the trilogy does happen and is interested to see how it plays out.

“I don’t know, I’m sure he wants to fight Poirier again and Poirier wants to make some big money,” Edgar explained. “I have to big up Dustin he had a great performance and is a great guy who has helped me train in the past. I’m just happy for Dustin.”

Frankie Edgar is set to return in the co-main event of UFC Vegas 18 against Cory Sandhagen. The hope for the former lightweight champion is to earn a stoppage win over the rising contender and earn a title shot at bantamweight and cement his legacy even more.

Who do you think would’ve won if Frankie Edgar and Conor McGregor fought all those years ago?