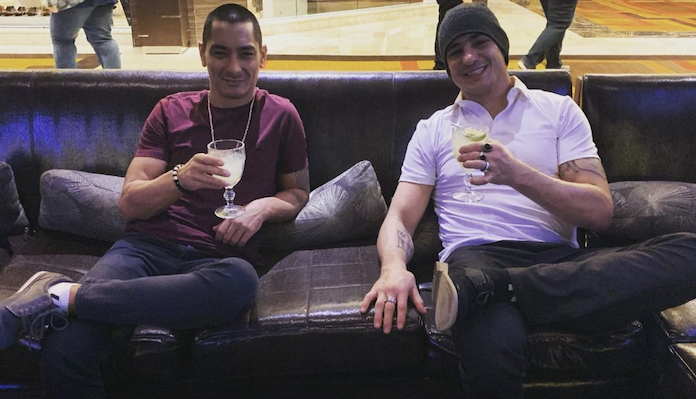 Joshua Fabia blasted Diego Sanchez following the pair’s split, suggesting that “Diego has clearly been taking advantage of me for two years.”

It was last week that Sanchez announced that he has left Fabia after working with him over the last few years. The straw that broke the camel’s back seemed to be Sanchez getting released by the UFC last month and then a video that emerged of Fabia punching and kicking Sanchez in the head while he hung upside down. Fighters, fans, and media blasted Fabia for his training methods in the video, and a week later, Sanchez left him.

Now Fabia is firing back. Speaking to the “Behind the Scenes with Summer Helene” podcast, Fabia opened up on his split with Sanchez, suggesting he was taken advantage of.

“As I get to more information as I’m with the lawyer, and the lawyer talks to Diego and asks Diego about his education, and he starts talking about he was in special education. Holy sh*t. Huge red flags, man. This is not, at all, what anyone who perceived, and Diego is not anywhere near what anybody knows, man,” Fabia said (h/t BloodyElbow).

“And Diego has been an addict. He hasn’t told anybody for the past five months, I was his sponsor living with him. That I had to live there because he was broke and lost all his money, and strung out on Kratom and alcohol and 30 other substances. That he has sexual abuse issues. No, he didn’t say any of that, man,” continued Fabia. “And I’ve been holding up all this. I’ve been doing everything. And everybody’s coming at me. I’ll put it out there, I’ll put out all the proof, I’ll put out all the videos, man. Diego has clearly been taking advantage of me for two years, as I have been fighting for him, and putting myself on the line for him with zero benefit. I am the one getting death threats here.”

What do you think about the split between Joshua Fabia and Diego Sanchez?