The YouTuber-turned-boxer has spent the majority of his boxing career calling out MMA fighters. On that front, he’s actually faced two of them in the ring, defeating both Ben Askren and Tyron Woodley. His most recent outing was a knockout victory over ‘The Chosen One’ in December.

Following that bout, he’s continued his attack on MMA fighters. Over this time, he’s called out such names as Conor McGregor, Nate Diaz, and Jorge Masvidal. He’s also displayed an interest in training in the sport of MMA, and fighting in the UFC eventually.

It seems that Demetrious Johnson believes that’s a great idea, as he stated in an interview with MMAJunkie. ‘Mighty Mouse’ is fighting this weekend in a mixed-rules bout against Rodtang Jitmuangnon in ONE X. The way Johnson sees it, if he can fight in that bout, Paul can actually compete in MMA. 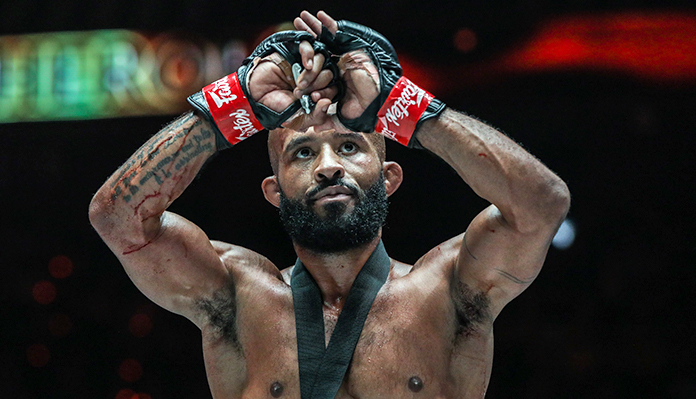 “If Jake Paul thinks he’s so f*cking bad at boxing and all that stuff, hats off. You’re 3-0, 4-0 as a boxer. Do f*cking mixed martial arts. I did an interview the other day and I was like, ‘Everybody is worried about fighting this person, let’s see how much money I can make from this person.’ I was like, ‘Just do mixed martial arts.’ You think you’re that great, just do it. If I thought I was a badass boxer, I would be like, ‘Let me just box.’ Even when they offered this fight to me, it’s Rodtang. I was like, ‘I’ll fight in muay Thai.’” (h/t MMAJunkie)

“I don’t give a f*ck. What’s the worst thing that could happen? I get knocked out? OK. I go back home, train, get ready for the next one. If I win, what’s gonna happen? I go home, go get ready for the next one. So, for me, I could say I did it, I tried. As you get older, you find that you don’t knock people for trying. For me, when someone is like, ‘Ah blah, blah, blah, you MMA guys suck.’ It’s like, ‘Then come do it.’ If you’re successful, good job. You lose, you tried it.”

What do you think about Demetrious Johnson’s comments?
This article appeared first on BJPENN.COM
Previous articleDarren Till proclaims “future champion” Tom Aspinall would beat Jon Jones: “He would play with him”
Next articleNate Diaz makes formal request to be released by the UFC
© Newspaper WordPress Theme by TagDiv