Demetrious Johnson appeared to be at his brilliant best when he knocked out Adriano Moraes with a flying knee to win the ONE Flyweight World title in their rematch last weekend.

‘Mighty Mouse’ is widely-considered to be the GOAT of MMA and the 36-year-old believes he’s taken his game to a new level. The former UFC champion at 125lb appeared on the MMA Hour and described how he initiated his now iconic finishing sequence against the Brazilian.

“Going into the fourth I was on the stool …I looked at Matt and I go ‘Zombie time’ and just took it to him,” Demetrious Johnson explained before adding, “It was a thing we worked on in training a lot. It’s how I look at it. You’re like a zombie just walking forwards covering distance. In the gym I would get lit up. This was probably the hardest training camp I’ve had when it comes to being disciplined towards the game plan and I just call it ‘zombie.’ I don’t care what he throws, I go forward. I don’t give a damn. In order to get it done.”

DJ is already the owner of one of the sport’s most spectacular submissions when he suplexed Ray Borg into an armbar in the fifth round of their UFC flyweight title fight in 2017. His finish against Moraes at ONE on Amazon Prime 1 makes a claim at being one of the most beautiful knockouts ever. Having slipped a punch, Demetrious Johnson threw a right hand and wobbled his opponent who stumbled backwards. From there he picked his spot before unleashing the flying knee to end the fight.

“That sequence, I would say that’s perfect,” agreed Demetrious Johnson. “The only thing I could take away from that sequence that I could say is that my hands weren’t up. When I show the left hand and duck down my hands aren’t up like a boxer. But you’re not as quick here,” he added.

The champ’s stoppage in Singapore was made all the more poetic as his opponent had finished him with a knee in their first encounter, coupled with the fact that it was a ‘walk-off’ knockout.

“His gas tank was going down. So when I landed that knee it was like the spear bomb from Dragonball Z dogg. When Goku throws that spirit bomb? 9 out of 10 times the person is done …to be able to go out there and land the knee and have a walk off – it was picture perfect,” Demetrious Johnson told Ariel Helwani.

As the Kentucky-born star added another chapter to his storied career, he suggested that he’s open to a trilogy against Moraes but is keen for new challenges such as #2-ranked Kairat Akhmetov who’s currently on a fight-fight winning streak.

Who should DJ defend the belt against? 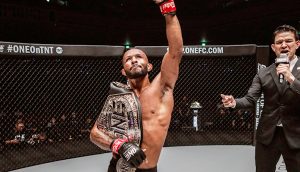