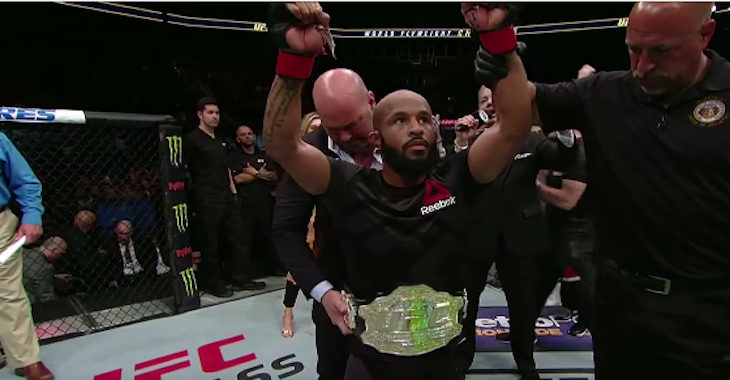 Round one begins and Demetrious Johnson is landing some big inside leg kicks to start. He rushes in but Borg quickly steps back and avoids. DJ goes upstairs with a head kick but Ray blocks it. Borg is moving forward. He throws a combination that misses. Johnson returns fire with a low kick. DJ shoots in and gets Borg to the floor. He immediately moves to take the back. Borg scrambles and gets back to his feet. Borg shoots in but Demetrious defends the takedown attempt. Borg is hanging on to a leg. He presses DJ against the cage. Mighty Mouse is working some uppercuts. Demetrious scrambles and take the back of Borg. Ray rolls and Johnson ends up in half guard. Johnson steps over into side control. He is working on a kimura. Twenty seconds remain. Borg scrambles but DJ remains on top. Round one comes to an end.

Round two begins and Borg quickly shoots in and presses DJ against the cage. Johnson switches the position. Borg scrambles and gets Demetrious back against the fence. He drops down and scores a takedown. DJ gets up but gives up his back. Borg locks in both hooks. Johnson scrambles and winds up in top position. Demetrious working from half guard now. Johnson begins raining down some right hands. He looks for a kimura but it is not there. DJ looks to take his back. Borg scrambles back to his feet. Now he presses DJ along the cage. Demetrious switches the position and scores a takedown. Mighty Mouse moves to side control. Borg scrambles but winds up in north-south position. Dj presses him against the cage and works in some shot. Round two comes to an end.

Borg gets DJ's back, but DJ just shakes him off. Incredible #UFC216 pic.twitter.com/Ao1zvnJA5h

Round three begins and Ray Borg shoots in. He grabs a hold of a single leg and presses DJ against the cage. He is working for a takedown. DJ is able to scramble and once again wind up on top. He moves to side control and begins working in some short shots. He looks to trap an arm. Borg won’t allow it. DJ with some hard knees to the body. He works in an elbow. He lands a left hand from the top. He is just smothering Borg now. Ray scrambles back to full guard. Johnson quickly hops over into side control. He moves to full mount. Borg scrambles but gives up his back. DJ is landing some short shots from the back position. He is looking to work in a rear-naked choke. Borg scrambles and gets back to being laid on in side control. Another scramble and Ray is back up. He locks in a guillotine choke and drops to the floor. Mighty Mouse survives as the horn sounds to end round three.

Round four begins and Ray Borg charges in and presses DJ against the fence. He picks Mighty Mouse up and slams him down to the canvas. DJ scrambles back to his feet. He gets Borg to the floor and begins working some right hands. He moves to half guard and begins use some shoulder shots. DJ with a left hand now. Three minutes remain. Borg is able to scramble to his feet and eats a knee. DJ pushes him against the cage and then takes his back. He lands a head kick from that position. Wow. Borg gets DJ off of his back but is still pressed against the fence. Mighty Mouse drags him to the floor and winds up in side control. He is looking for a kimura once again. It is not there. DJ with a knee to the body from side control. Borg scrambles back up to his feet but Mighty Mouse drags him back down. Round four comes to an end.

DJ throws a high kick from Borg's back!?! #UFC216 pic.twitter.com/lv8oCKWBbM

Round five begins and Demetrious pushes forward. He shoots in and scores an early takedown. DJ immediately moves to side control and begins working some short shots. Borg attempts to scramble but eats a knee. Ray gets back to his feet. He gets a hold of DJ but cannot get him down. Mighty Mouse shoots in and scores a takedown. After a crazy scramble DJ stays on top. He locks in an armbar. Wow. Borg is trying to fight out of it but can’t. He is forced to tapout. DJ makes history!