Daniel Cormier was on hand to witness Francis Ngannou score yet another devastating first round knockout last night at UFC 249 in Jacksonville.

‘The Predator’ was taking on Jairzinho Rozenstruik in a bout to determine the heavyweight divisions top contender on last night’s pay-per-view main card.

The bout lasted a mere twenty-seconds, this after Francis Ngannou unloaded a savage combination that left Rozenstruik in a state of unconsciousness.

The victory marked Ngannou’s fourth in a row, with all four of those wins coming by way of brutal first round knockouts. During that impressive stretch, ‘The Predator’ has needed a total of 2 minutes and 42 seconds to put away opponents Curtis Blaydes, Cain Velasquez, Junior dos Santos and now Jairzinho Rozenstruik. 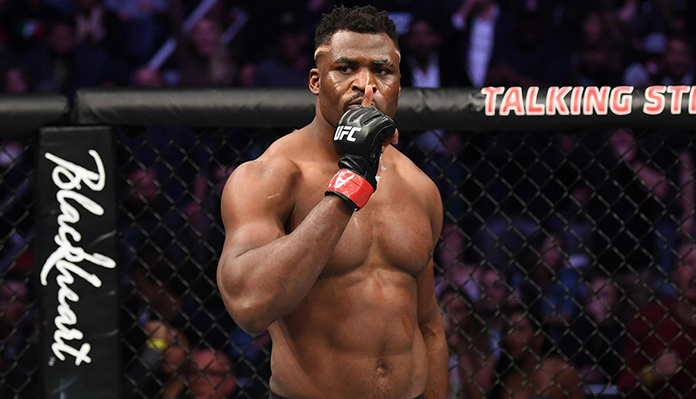 The loss served as the first of Rozenstruik’s professional career, as he had entered UFC 249 sporting a perfect record of 10-0.

Earlier today, former UFC heavyweight champion Daniel Cormier reacted to the latest knockout from Francis Ngannou while responding to a photo of his reaction to last night’s finish.

This is hilarious, this reaction is real. The moment I saw @francis_ngannou start to head downhill I knew jarzinho was in trouble. Crazy , insane , power. This dude gives the refs heart attacks, they run in like they’re trying to save his opponents lives, maybe they are sheesh! https://t.co/qWi4pBAHal

“This is hilarious, this reaction is real. The moment I saw Francis Ngannou start to head downhill I knew Jairzinho was in trouble. Crazy , insane , power. This dude gives the refs heart attacks, they run in like they’re trying to save his opponents lives, maybe they are sheesh!

Daniel Cormier is expected to be the next man to challenge reigning UFC heavyweight kingpin Stipe Miocic. The bout would serve as a trilogy, as Miocic and ‘DC’ have met twice in the past. Cormier won the pairs first encounter at UFC 226 by way of first round knockout, but Miocic exacted his revenge in their rematch at UFC 241 earning a fourth-round TKO victory.

With a trilogy bout between Miocic and Cormier expected to be booked next, Francis Ngannou believes it could be nine months before he returns to the Octagon for his promised title opportunity.

What do you think of the recent comments from Daniel Cormier regarding heavyweight knockout artist Francis Ngannou? Share your thoughts in the comments section PENN Nation!

This article first appeared on BJPENN.com on May 11, 2020