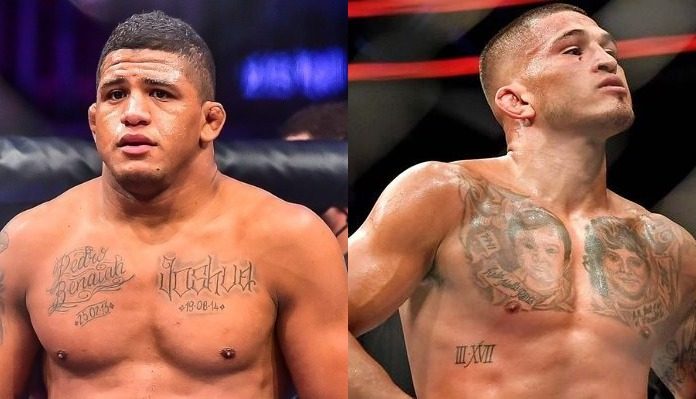 Gilbert Burns has his eyes set on Anthony Pettis for his next fight.

Burns, who is on a four-fight winning streak, has taken back-to-back short notice fights at welterweight. There, he handed Alexey Kunchenko his first loss as a pro and followed that up with a decision win over Gunnar Nelson to enter the top-15 of the division.

Given he has fought at both welterweight and lightweight, the Brazilian has called for a fight with Anthony Pettis, who has also competed in both weight classes.

Burns has been calling for a ranked opponent since his win over Nelson, where he originally told BJPENN he wanted Neil Magny.

“I hope so. I don’t how things are going with USADA, I hope he can be cleared, I think he is. That fight makes sense, I hope it happens,” Burns explained. “He hasn’t fought for a while and I’m doing good at 170, my record in the UFC is 3-0 at welterweight. Fans are liking me so hell yeah I want that fight.”

Yet, he has shifted his focus to Pettis who is 10th in the welterweight division and 11th at lightweight. So, Gilbert Burns believes it is a good fight for him and a very intriguing matchup. Pettis is a striker and will look to keep the fight on the feet, while Burns has shown he has solid striking is a Brazilian jiu-jitsu world champion, so he should have the advantage on the ground.

It also makes sense ranking wise as Pettis is 1-1 at welterweight and coming off the loss to Nate Diaz. So, there is a chance he will have to fight down in the rankings where Burns is ranked 14th and on the rise at 170 pounds.

Gilbert Burns vs. Anthony Pettis is a fight that could headline a Fight Night card or be on the main card of a pay-per-view. However, “Showtime” has yet to respond to the callout so it is unknown if he is interested in the fight.

Would you want to see Gilbert Burns vs. Anthony Pettis? And, if it does happen, who do you think would win? Sound off in the comment section, PENN Nation!