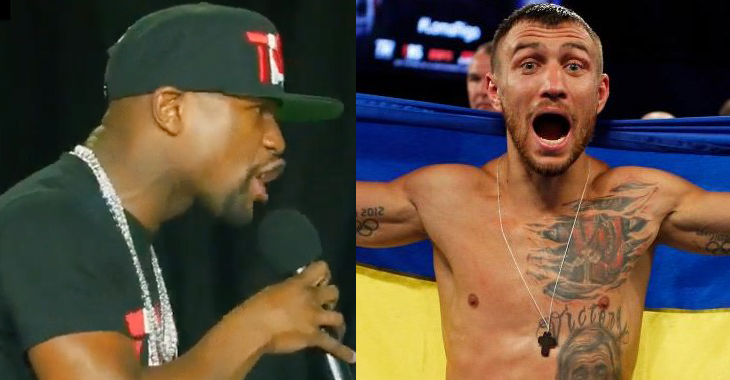 Vasyl Lomachenko has been getting a ton of praise for his superior boxing skills and IQ.

Lomachenko just defended his WBO super featherweight title against the previously unbeaten WBA super bantamweight champion Guillermo Rigondeaux, who quit on the stool before the start of round seven. That makes the fourth opponent in a row to end the fight against Lomachenko by RTD.

While most boxing pundits and fans praised “Hi-Tech” for his wizardry in the ring, Floyd Mayweather recently spoke with Fight Hype and had some criticism for the two time Olympic gold medalist.

“I never fought a guy that was that small. He was smaller than that. Honestly, they didn’t look like they belonged in the ring together,” Mayweather said of the matchup with Rigondeaux going up two weight classes for the bout (transcribed by Anton Tabuena for Bloody Elbow). Mayweather’s statement was an interesting one as he fought Juan Manuel Marquez back in 2009. At that time, Marquez went up two weight classes for the bout where Mayweather came in two pounds over the weight limit and was forced to pay Marquez a fine.

“It really was no damage done to neither side,” Mayweather continued. “It was a real just robotic, real stiff, robotic fight. Nobody really landed like no killer, solid shots, no real shots. You can look at me and Diego Corrales, or me and Arturo Gatti.

“I can’t take that away from Lomachenko. He went out there and done what he had to do, but one thing he can’t do is knock (out) a guy.”

Mayweather went on to criticize Rigondeaux who claimed he hurt his hand during the fight, which was his reason he quit after round six. “Even with Rigondeaux. I don’t think Rigondeaux had a hand problem. I don’t. We live and we learn. Rigondeaux should just take that as a learning experience. A guy that big, I could see the difference when they got into the ring. A small good fighter will never beat a big good fighter. It’ll never happen.

Lomachenko took to Twitter on Tuesday and had a couple of tweets directed at Mayweather.

. @FloydMayweather It would have been an honor to fight you in your prime but I’m not talking about you. Please stop hiding your fighter.

What do you make of Floyd Mayweather’s assessment of Vasyl Lomachenko and the what “High-Tech” tweeted? Let’s discuss this in the comment section.