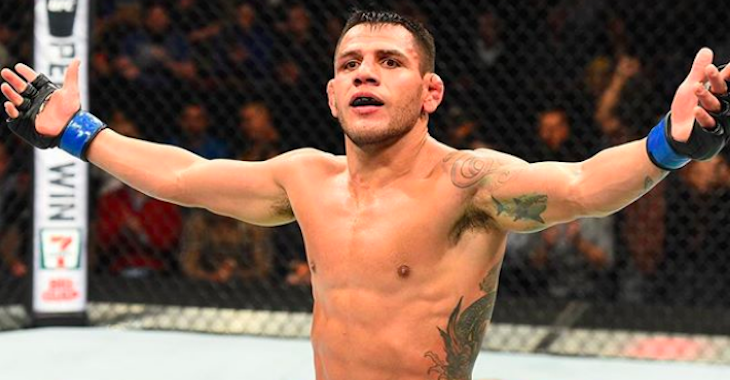 Shortly after this breakthrough win, dos Anjos received a callout from fellow welterweight contender Stephen “Wonderboy” Thompson, who called him out for a title eliminator bout to establish a true number-one-contender.

That was a WAR! Hats off to both RDA and Robbie for that effort! I can be back in the Octagon this March. @RdosAnjosMMA , let’s give the fans another treat. We both want gold, it’s only fitting we battle for it! @ufc #UFCWinnipeg @danawhite

Unfortunately for Stephen Thompson and his fans, dos Anjos doesn’t seem to be interested in this fight. On Tuesday, the Brazilian contender took to social media with a sort “thanks, but no thanks” message for Thompson.

Thank you @WonderboyMMA for recognizing me as a top dawg! You had your two shots…let me have mine 👍🏻👊🏾

“Thank you [Wonderboy] for recognizing me as a top dawg,” he said, before referencing Thompson’s two previous losses to reigning UFC welterweight champion Tyron Woodley. “You had your two shots… Let me have mine.”

Dos Anjos was also called out by top contender Colby Covington after his win over Lawler, but he shut that idea down too.

“I have no comments about that guy, man,” dos Anjos said of Covington at the UFC on Fox 26 post-fight presser (h/t MMAJunkie.com). “That guy has 6,000 followers on Twitter. He’s just talking crap about people. He showed nothing to the division. He’s beat nobody. He beat Demian Maia, but he looked really bad when he fought Demian, and I have no comments on that guy.”

Needless to say, it seems that Rafael dos Anjos is hellbent on a fight with Tyron Woodley and that he’s not interested in much else.