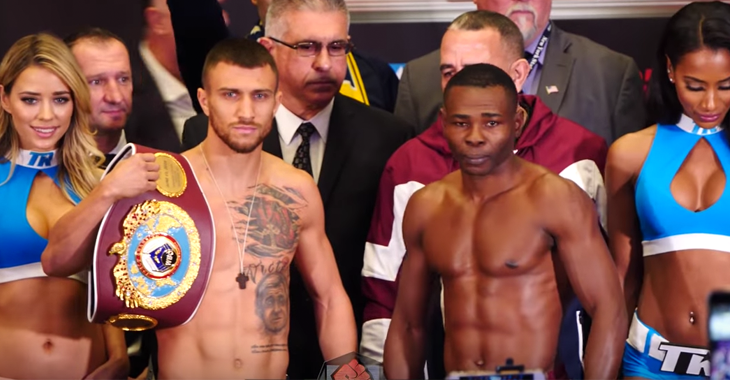 Lomachenko, who went into the fight as the reigning WBO junior lightweight champion won his first gold medal for Ukraine in the 2008 Beijing Olympic games and again in the 2012 London games.

Rigondeaux, the WBA junior featherweight champion, moved up two weight classes to challenge Lomachenko won his first gold medal for Cuba at the 2000 Sydney Olympic games and captured his second at the 2004 Athens Olympics. This matchup marked the first time in professional boxing history that two opponents have won multiple Olympic gold medals.

Round 1: Fight starts off with both fighters feeling each other out and judging distance. Not a lot of action from either fighter but Lomachenko likely got the round with a bit more work done leading with his jab and a nice left at the end of the round.

Round 2: Pace picks up with more action as Rigondeaux works his jab and hits Lomachenko with an uppercut. Lomachenko answers with a two-punch combo that gets his attention. Rigondeaux holds the head of Lomachenko and lands two uppercuts but was not called by the ref for the illegal move. Lomachenko takes round 2.

Round 3: Rigondeaux starts off again with his jab and works the body of Lomachenko. Lomachenko also works his jab connecting with Rigondeaux with a counter right hook. Lomachenko lands an uppercut and Rigondeaux and has some swelling on his right eye. Lomachenko ends up landing the cleaner shots and takes round 3.

Round 4: Lomachenko getting the better of Rigondeaux with his jabs and works from all sorts of angles. Rigondeaux having a hard time finding Lomachenko at the end of his shots. Lomachenko gets warned for hitting Rigondeaux on the top of the head with a hammer fist. Rigondeaux misses a big left and Lomachenko wins another round.

Round 5: Lomachenko putting together nice combinations with speed and Rigondeaux can’t seem to keep up. Lomachenko working quick jabs lands a nice left and takes round 5.

Rigondeaux’s corner calls an end to the fight as Rigondeaux says he has an injured left hand and is unable to continue. Lomachenko earns a TKO victory outclassing Rigondeaux and gives more reasoning for his status to be at the top of the pound-for-pound debate!