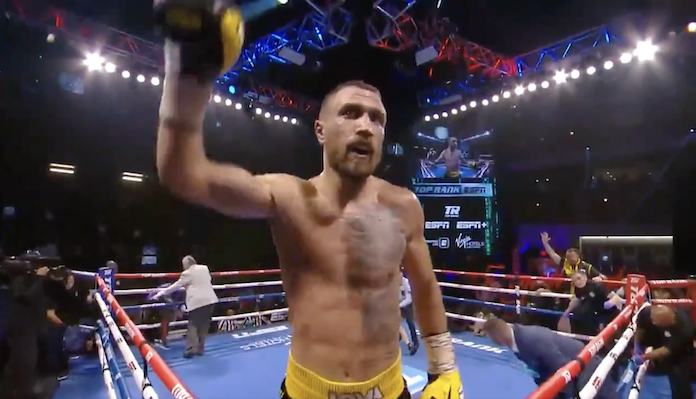 Lomachenko was making his first appearance in the boxing ring since losing his lightweight titles last year to Teofimo Lopez in an upset. Against Nakatani, Lomachenko got right back to work as he looked unbelievable in this fight against the Japanese boxer, lighting him up with strikes and then finally finishing him in spectacular fashion in the ninth round of the fight when Nakatani was no longer able to defend himself and the ref stopped the fight. Take a look at the video of Lomachenko’s finish on Nakatani during their boxing match.

With the win, Lomachenko improved to 15-2 as a professional boxer and the win over Nakatani will help him get back into the mix for a rematch against Lopez after he lost his belts last year. Lomachenko has proven over the course of his professional boxing career that he is one of the best fighters in the world, and though the defeat to Lopez last fall was a tough pull for Lomachenko to swallow, the fact he looked so good here was impressive.

As for Nakatani, although he proved to be very tough and hard to finish in this fight, ultimately Lomachenko was able to put the finishing touches on his opponent and finish him in the ninth round. Nakatani has now lost to both Lomachenko and to Lopez, so he doesn’t appear to be anywhere close to fighting for the lightweight title anytime soon, but he is certainly a very tough individual and did all he could to survive against Lomachenko. But he just didn’t have what it took and Lomachenko proved once again there is a reason why he is a pound-for-pound great in boxing.

What do you think is next for Vasyl Lomachenko after finishing Masayoshi Nakatani?