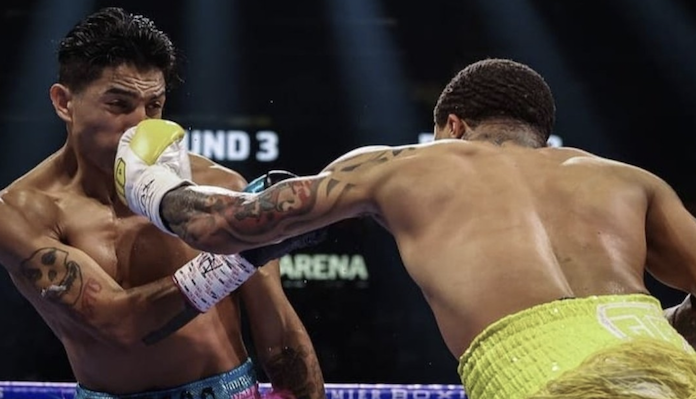 Boxing superstar Gervonta Davis stopped Mario Barrios in the 11th round of their boxing match on Saturday night in Atlanta, Georgia.

Davis entered this fight with a perfect 24-0 professional boxing record with 23 of those wins coming by knockout, and he upped that to 25-0 with 24 knockouts when he stopped Barrios with strikes in round 11. It was another incredible performance by “The One,” who proved once again that he is one of the hardest P4P punchers in the world right now. Check out the videos below of Davis putting away Barrios with hard and brutal punches.

Very enjoyable fight to watch and statement made from Gervonta Tank Davis!

Get him in that 135 lb division, there are some real good fights to be made. pic.twitter.com/HDYkH0JhPx

Very enjoyable fight to watch and statement made from Gervonta Tank Davis! Get him in that 135 lb division, there are some real good fights to be made.

Davis has won all 25 of his pro boxing matches since beginning his career in 2013, and he’s won his last 16 fights in a row by knockout. He has shown time and time again that he is one of the hardest punchers at lightweight and against Barrios he proved that once again as he picked up the incredible knockout win on Saturday. Davis looked to be absolutely on point against Barrios and it was arguably one of the most impressive wins of his career.

It will be interesting to see what Davis does next. This fight with Barrios actually took place at super lightweight, but there could be bigger and better fights for him down in weight at lightweight. Of course, he could also fight at super-featherweight. There are plenty of fun fights for Davis to take on going forward in his career, and if he continues to keep knocking his opponents out like this, he will continue to be one of boxing’s brightest young stars.

What do you think is next for Gervonta Davis after stopping Mario Barrios?