Sam Alvey explains callout of Jake Paul after UFC release: “I haven’t won in a while, which is the kind of guys he likes to fight, so that makes sense”

Former UFC middleweight Sam Alvey has revealed why he called out Jake Paul on social media.

‘Smilin Sam’ is fresh off his knockout loss to Michał Oleksiejczuk at UFC Vegas 59 last Saturday. The bout was the last on his UFC contract, and the promotion doesn’t plan to bring him back. Alvey didn’t win any of his last nine contests in the UFC.

Following the news that the UFC wasn’t going to pick up his contract, the 36-year-old took to social media. There, Alvey decided to call out Jake Paul for a boxing match. The 25-year-old YouTube star recently had his comeback fight with Hasim Rahman Jr. canceled.

Now, on The MMA Hour with Ariel Helwani, Sam Alvey has explained the callout. Simply put, according to the UFC veteran, the fight makes sense. As he joked, Alvey is currently riding a losing streak, which is the type of fighters Jake Paul likes to compete with.

‘The Problem Child’ famously hasn’t fought anyone who’s won a professional boxing match. That, combined with the two men being similar in size, leads Alvey to believe the matchup makes sense. He also revealed he was supposed to spar with Paul previously, but the YouTuber backed out. 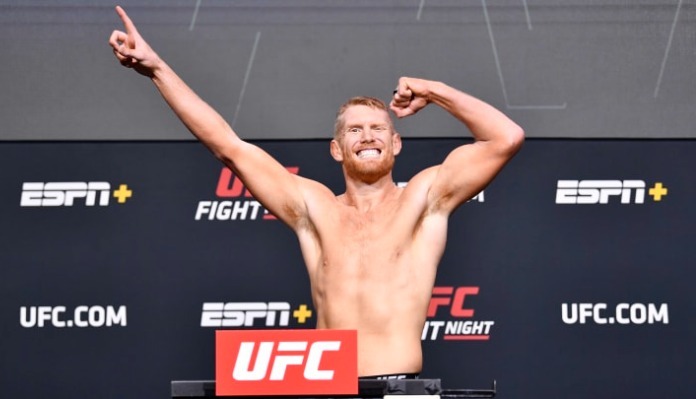 “I haven’t won in a while, which is kind of the kind of guys he likes to fight, so that makes sense. I’m the same size of him, which will be different for him. He tends to like to fight guys that are smaller than him, so he’ll have to make a little exception for that. But I’m the first guy that he would fight, that’s a knockout guy. I’m a guy who’s always been a striker, I would be the first non-wrestler. I’m not quite a boxer, I’ve never boxed. I’ve kickboxed, 7-1 in professional kickboxing.”

Sam Alvey continued, “…I think it makes sense. I almost broke Logan [Paul]’s jaw in a sparring session, I was doing the best I could to carry him and just be a training partner. But, he just kept getting hit… I was supposed to spar his brother too, Jake, Jake wouldn’t do it afterwards.”

Do you want to see Sam Alvey vs. Jake Paul? Sound off in the comment section below!