‘The Monsoon’ is set to return this Friday against Mukhamed Berkhamov at Bellator 283. It’ll be the first appearance for Larkin since his knockout of Kyle Stewart in May. With a win this weekend, the 35-year-old could move his win streak to seven.

However, at media day this week for Bellator 283, the middleweight didn’t discuss his fight often. Instead, Larkin decided to take aim at Jake Paul, as well as the state of combat sports in general.

The 35-year-old stated that he feels this era of combat sports is in decline, largely thanks to fighters such as Paul. Pointing to ‘The Problem Child’ as an example, Larkin referenced how he will only fight MMA fighters in boxing, rather than serious professionals.

Furthermore, Lorenz Larkin opined that due to the success of the Paul brothers, fans look at combat sports athletes differently. Overall, the Bellator star feels that the YouTubers delegitimize the sport by competing in the fashion they do. 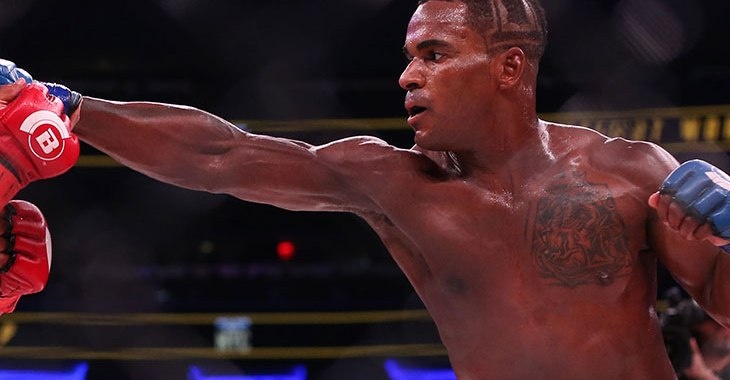 “It’s just hard because those guys just come over to our world, to combat sports, and they think they can fight,” Larkin said. “These motherf******, if they want to come in, put them with somebody serious serious. Put them with someone who can really box, if they just want to box. Put them with a real boxer, not just some bulls***. It’s just a s***** era right now, man.” (h/t MMAFighting)

Lorenz Larkin continued, “It’s a different era now, and not for a good reason. I just like to fight, and as long as I get to fight, I don’t need to do anything else. But the era now is just talk — talking and picking the right fights for yourself, not necessarily challenging yourself, but getting the easiest fights there are for your style so you can grow your social platform. That’s what it’s all about right now, that’s the era for most fighters.”

“Now guys aren’t necessarily asking for the top guys, they’re trying to talk a lot and get matched up against guys that aren’t maybe on their level yet, and then skip the beef in their weight classes off of their hype off social media and their fans. It’s more so taking the easier fights, talking a lot of s***, creating drama, and getting the fan base to get behind you so you can skip the tough fights, and get the big fights. If you lose, you lost to the champ, but you skipped over everybody.”

What do you think about Lorenz Larkin’s comments? Sound off in the comment section below!