Jiri Prochazka could only watch as Jan Blachowicz and Magomed Ankalaev fought for the UFC light heavyweight title at UFC 282.

The Czech was scheduled to compete in the main event and defend the strap in a rematch with Glover Teixeira.  But ‘Denisa’ was forced to vacate the belt after suffering a chronic shoulder injury in the lead-up to the bout.

It transpired that no new champion would be decided as Blachowicz and Ankalaev fought to a controversial split draw. Prochazka would like to have seen both men offer more on the night. Speaking on the MMA Hour, the former champ said,

“They [Ankalaev and Blachowicz] not gave 200% to get the title. Because for me, it’s simple, if you are in the UFC and if you are fighting for the title or every fight it doesn’t matter, you have to fight for life,” explained Prochazka.

‘BJP’ has unique views around martial arts and is known for living his life by a samurai code inspired by Muyoto Musashi’s Book of Five Rings. Having arrived from Rizin where he also reigned as champion, the European star had a reputation for putting on exciting fights. He certainly lived up to the billing. All three of his UFC bouts have ended via stoppage and all were awarded performance bonuses.

Having climbed to the pinnacle of the sport, the 30-year-old clearly has an elite mentality. His mental strength is exemplified by how he’s approaching his time on the sidelines.

“A lot of people are saying it’s necessary to keep it eight, nine months, but I know my body, and I believe I can fix it in three or four months to the full power,” Prochazka told Ariel Helwani. “There is nothing in my life … where something is not possible. If I take it like a target, I will work on it 24 hours, day and night. Doesn’t matter.

“I believe there is in mankind, a power that we can use, with all the humility and all the power, just believe it. I will be back as soon as possible, stronger than ever,” Prochazka added.

The Brno-based star is known for exploring unorthodox techniques to nurture his mental strength including spending several days alone in a dark room and training in the forest. So far, it seems to be working well. Prochzaka is currently riding a 13-fight winning streak, and you wouldn’t bet against him making a surprise return to action sooner than expected.

What do you make of Prochzaka’s comments on the Blachowicz vs Ankalaev fight? 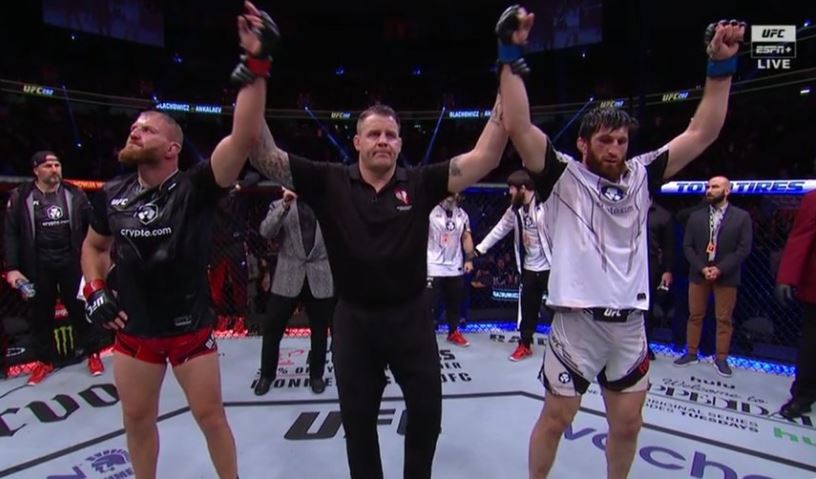 This article appeared first on BJPENN.COM
Previous articleBrendan Schaub slams Khabib Nurmagomedov over his Islam Makhachev prediction
Next articleBKFC president says if Paige VanZant doesn’t re-sign “it was a good ride and a good decision,” but still open to extending her contract
© Newspaper WordPress Theme by TagDiv