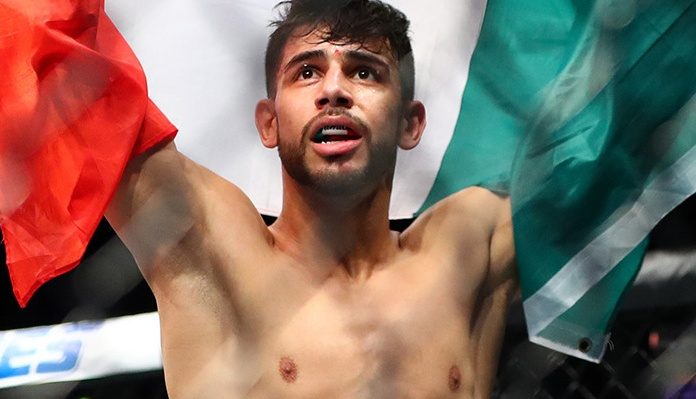 Yair Rodriguez has revealed he will receive a title shot if he gets his hand raised on Saturday at UFC Long Island.

Rodriguez is set to headline the card against Brian Ortega in a pivotal fight for the featherweight division. Both men are right near the top of the ranks and given ‘T-City’s’ last fight was for the belt, the Mexican revealed on The MMA Hour that if he wins on Saturday he will receive a title shot.

Yair Rodriguez tells @arielhelwani that he's been told he's getting a title shot if he defeats Brian Ortega this Saturday. #TheMMAHour

“Yair Rodriguez tells @arielhelwani that he’s been told he’s getting a title shot if he defeats Brian Ortega this Saturday.”

The news is no doubt disappointing for Josh Emmett who has been campaigning for a title shot since he beat Calvin Kattar at UFC Austin. Emmett is on a five-fight win streak while Rodriguez lost his last fight, yet, it appears the UFC wants the Mexican to fight for UFC gold as he has an entertaining style and is a fan-favorite.

Although Yair Rodriguez says he will get a title shot with a win, beating Brian Ortega at UFC Long Island is easier said than done. He’s currently the betting underdog for the fight but he has all the confidence in the world he will get his hand raised and face Alexander Volkanovski next time out.

Yair Rodriguez (13-3 and one No Contest) is coming off a competitive decision loss to Max Holloway in November. The fight marked his return to the sport as he hadn’t fought since October of 2019, when he defeated Jeremy Stephens by decision. He’s currently ranked third in the featherweight division and in his career, he holds wins over Korean Zombie, BJ Penn, Alex Caceres, Andre Fili, and Dan Hooker among others.

What do you make of Yair Rodriguez saying he gets a title shot if he beats Brian Ortega on Saturday?