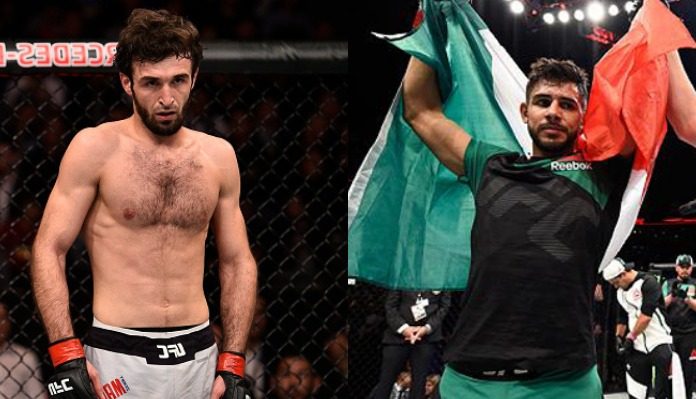 Yair Rodriguez has weighed in on Zabit Magomedsharipov’s retirement from MMA.

Zabit (18-1 MMA) has not been in the Octagon since November of 2019, when he fought and defeated Calvin Kattar (23-6 MMA) by unanimous decision. The Russian’s only career loss was back in 2013 when he went down to defeat against Igor Egorov (13-8 MMA).

Rumours of health issues and other factors had fans speculating on when Magomedsharipov would make his return to the cage. That speculation was put to rest just last month when the 31 year old officially announced his retirement from mixed martial arts.

“Assalamu alaikum friends! I know that many of you were waiting for my return, there was not a single day that someone did not ask when is my next fight was. But I decided to end my pro sports career.”

“Disruptions of fights, and then health problems – all this did not allow me to perform/fight earlier. I have recovered now, but I don’t feel the way I used to.”

“Thank you to everyone who has supported me for such a long time. I didn’t have time to become a champion, but I think, even without this, I hope I was able to please/entertain you.”

“I cease to be an active athlete, but I do not leave the sport. I have something and with whom to share my knowledge.”

During an appearance on ‘The MMA Hour’, Yair Rodriguez reacted to Zabit’s retirement from MMA saying (h/t MMANews):

“Well, I thought he was already retired. So, I wasn’t surprised when I hear like, he officially retired… It’s sad that we never get to fight each other. There was a lot of things between him and I that was said.”

“But I don’t have any bad feelings towards the guy. I wish him the best. I hope he’s healthy. I hope everything’s going well in his life. It’s just sad that we never got to settle what we have.”

Rodriguez (14-3 MMA) had rejected a fight with Zabit back in 2018, but then the duo were scheduled to share the Octagon multiple times, however the Mexican was forced out because of multiple injuries.

So while Rodriguez is wishing Zabit well, he’s also disappointed they never got the opportunity to battle it out inside the cage.

But for now, Rodriguez is focusing on his upcoming match with Brian Ortega (15-2 MMA) this Saturday, July 16th, 2022.

Are you disappointed Rodriguez and Magomedsharipov never fought in the Octagon?