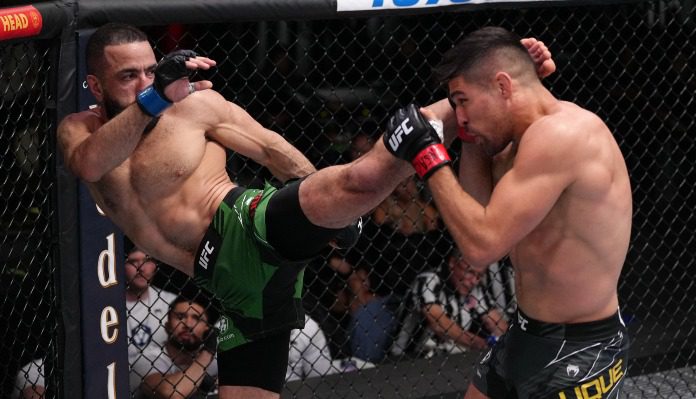 In the main event of UFC Vegas 51, a welterweight rematch between Belal Muhammad and Vicente Luque headlined the card.

Muhammad entered the fight coming off a dominant decision win over Stephen Thompson back in December. He was riding an eight-fight unbeaten streak going 7-0 with one No Contest with another notable win coming over Demian Maia.

Luque, meanwhile, was riding a four-fight win streak and coming off first-round stoppages over Michael Chiesa and Tyron Woodley. He also beat Randy Brown and Niko Price by TKO during this run.

In the end, it was Muhammad who won by decision as he used his wrestling to control the fight and win the decision. Now, after UFC Vegas 51, here is what I think should be next for Muhammad and Luque.

Belal Muhammad avenged his loss to Luque as back at UFC 205 it was the Brazilian winning by first-round TKO. This time around, Muhammad showed off his improved striking and wrestling to control the fight and easily cruise to a decision win.

After the victory, Muhammad called out Colby Covington, yet I don’t see that one happening. Covington has his eyes set on Dustin Poirier, while if that doesn’t happen, the Khamzat Chimaev fight makes a lot more sense for Covington. With that, the logical next oppponent is Gilbert Burns. The Brazilian is a close friend and teammate of Luque so the storyline is there while if Muhammad wins, he could earn a title shot.

Vicente Luque had moments in this fight as he looked like he rocked Belal Muhammad but his takedown defense wasn’t there which played a key role in the loss.

Had Luque won, he likely would’ve been in a title eliminator bout but now he will need to take a step back. There is the Stephen Thompson rematch available but a fight against Sean Brady makes sense. Brady needs a top-ranked opponent to prove he is legit as he says while if Luque wins, it would allow him to get another top-five opponent.

Who do you think should be next for Vicente Luque and Belal Muhammad after UFC Vegas 51?