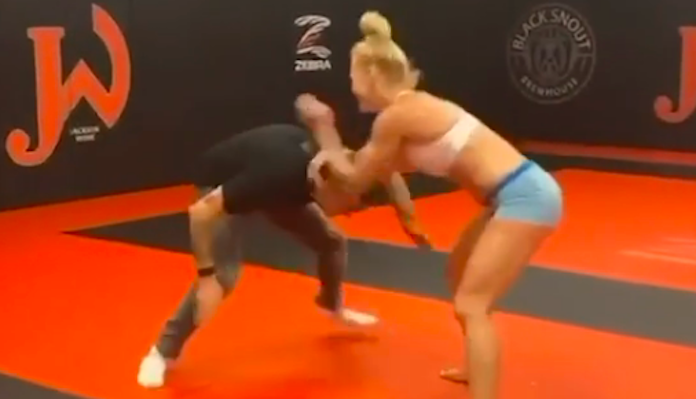 Steve-O has traded Jackass stunts for MMA, with the help of Jon Jones and Holly Holm.

The professional prankster and stuntman is a big fan of mixed martial artists and even recently interviewed UFC president, Dana White on his podcast. He has appeared on the Joe Rogan podcast and frequently shares his predictions for blockbuster bouts. He even announced the Shogun Rua vs. Antonio Rogerio Nogueira trilogy fight on his podcast earlier this month.

So, what better way to take his MMA fandom to the next level than by grappling some of the sport’s greatest athletes. Steve-O visited the acclaimed Jackson-Winkeljohn Academy in Albuquerque, New Mexico. There, he was greeted by the light heavyweight champion Jon Jones.

Accompanied by a lot of nervous laughter, Steve-O was taken to the ground by “Bones”. Watch the comical video of the stars grappling below.

Welcome back to the 505 @steveo

Earlier this month, Jones announced his retirement from the sport after rising tensions with the UFC over fighter pay and contract negotiations over a Francis Ngannou fight. However, this recent video leads fans to assume that the 205-pound fighter is still training.

UFC President Dana White recently confirmed the location of the official “Fight Island”, where he intends to host future fights in wake of the coronavirus pandemic. However, Jones’ future within the organization remains uncertain and he will likely need more than a private island to be tempted back into the cage. He has even suggested that he will return to college now he has more time on his hands.

Just got off the phone with Dr. Paxton of Iowa Central community college, I think I may be going back to college!!

“Just got off the phone with Dr. Paxton of Iowa Central Community College, I think I amy be going back to College!!”

I am, more than likely I’ll go to UNM or take some classes online https://t.co/SC7CEepFHK

“I am, more than like I’ll go to UNM or take some classes online.”

I am, more than likely I’ll go to UNM or take some classes online https://t.co/SC7CEepFHK

“Honestly, I just want to finish up my Associates Degree. Last I knew, I was a few credits short.”

Meanwhile, fellow Jackson-Wink star Holly Holm is still committed to her UFC career. The former bantamweight champion and Irene Aldana are set to headline a UFC Fight Night event on August 1. According to ESPN’s Brett Okamoto, the fight card is expected to take place at the UFC Apex in Las Vegas, Nevada.

Steve-O also got the opportunity to grapple with Holly Holm. However, his grappling attempts didn’t fare much better as “The Preacher’s daughter” worked her magic and took down the Jackass veteran. Watch the entertaining clip below.

Just a few more grappling sessions for the Jackass star and we could be looking at the next featherweight champion. Alexander Volkanovski, watch this space!