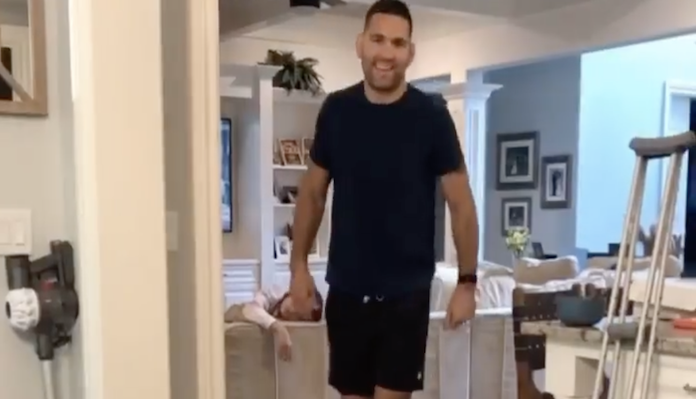 Former UFC middleweight champion Chris Weidman shared a video of himself walking on his own for the first time since breaking his leg.

Weidman suffered one of the most brutal injuries we’ve ever seen in the Octagon when he shattered his right leg on the first kick he threw against Uriah Hall at UFC 261 in April. Immediately after breaking his leg, Weidman was rushed to the hospital and he had surgery on his leg. It was a terrible injury for “The All-American” but he has been working hard during his rehab and recovery in order to not only walk again but return to the UFC.

Taking to his social media this weekend, Weidman shared an update with his fans. In the video, you can see Weidman walking on his own for the first time since he broke his leg.

Chris Weidman: I’m walking on my own! Big day baby!! Thanks for all the love and support. Inspired by you all! #recovery #walking #comeback #theallamerican #thankyouGOD

Weidman has been making public his road to recovery and his fans have been following along closely as the former UFC middleweight champion looks to heal up and make an incredible comeback to the UFC. When the injury initially happened, many fans feared that this might be the end of Weidman in the Octagon, but he has vowed to continue fighting and has been doing everything in his power in order to make it back to the cage. The fact that Weidman is now able to walk on his own just over a month after his leg broke is very inspiring and shows how much heart that he has. He wants to fight again and is doing everything in his power to make sure that he can one day make it back to the Octagon.

If Chris Weidman fights again, who do you want to see him fight in his comeback?