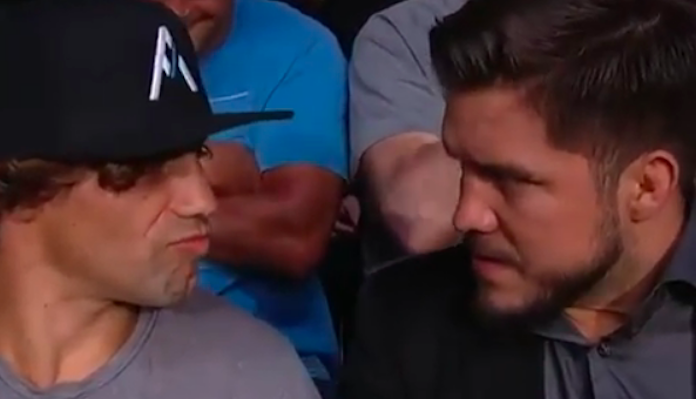 Urijah Faber, who recently emerged from retirement with a blitzkrieg win over Ricky Simon, is now eyeing a fight with the bantamweight division’s reigning champ Henry Cejudo.

Cejudo actually called Faber out after winning the title earlier this year. Yet Faber now worries Cejudo is backing down from this callout.

Speaking to MMA Mania at UFC 241, Faber updated on the status of this potential matchup. He says he still wants it, but isn’t sure it’ll happen.

“I’m fighting Henry Cejudo,” Faber said. “If they let me.”

If a fight with Cejudo fails to come to fruition, Urijah Faber says he’d be interested in battles with former lightweight champ Frankie Edgar, who recently shared his intention to drop to bantamweight, and streaking contender Aljamain Sterling.

“Frankie [Edgar] has dropped down to my weight class,” he said. “You know I went up to 145 because I was bored and fought him in the Philippines because it sounded like fun. A rematch with him is always a possibility. Aljamain [Sterling] is in the mix. He’s getting some clout.

Urijah Faber is currently on a two-fight streak, having recently bested Simon and Brad Pickett in the bout that led into his retirement. While he and Henry Cejudo have been going back and forth, it’s difficult to argue that Aljamain Sterling and Petr Yan have both done more to warrant a title shot — which is perhaps why the UFC hasn’t booked a Cejudo vs. Faber fight yet.

Who do you want to see Urijah Faber fight next?