Tonight’s main event proved to be another strong showing for the highly touted Jamahal Hill. Although he had to battle some adversity, ‘Sweet Dreams’ was able to secure a finish over ‘Marreta’ in round four, this after Santos appeared to be mounting a comeback in the third frame. The win marked Hill’s eleventh career victory and fifth under the UFC banner.

The co-main event of UFC Vegas 59 featured a welterweight contest between Vicente Luque vs. Geoff Neal. The bout resulted in a thrilling back and forth affair. Neal got off to a great start in the contest arguably earning a 10-8 in the opening round. However, Luque was able to turn the tide in his favor in round two, leaving the contest up in the air ahead of the final frame. In the final round Neal was able to deliver a barrage of punches that eventually resulted in Luque face-planting on the canvas.

Following the conclusion of tonight’s event, UFC officials announced at the post-fight press conference that five fighters would be taking home bonuses. 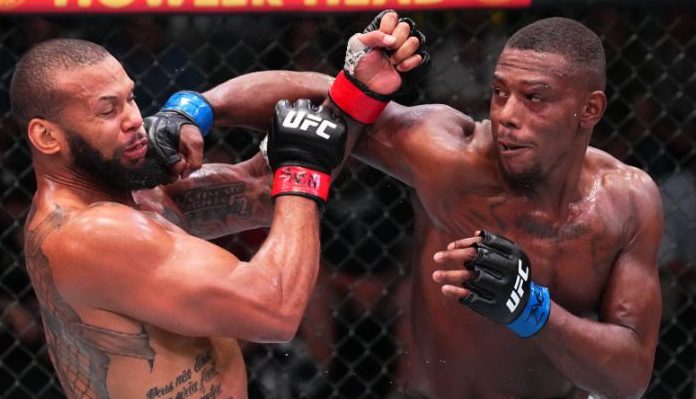 Fight of the night: Light heavyweight fighters Jamahal Hill and Thiago Santos earned ‘fight of the night’ honors for their thrilling war in tonight’s UFC Vegas 59 headliner. Hill won the bout by TKO in the fourth round (see that here).

Performance of the night: Bryan Battle earned an extra $50k for his first round knockout victory over Takashi Sato. Battle landed a nasty head kick which sent his opponent crashing to the canvas (see that here).

Performance of the night: Mohammed Usman pocketed an extra $50k for his second round knockout victory over Zac Pauga. The brother of reigning UFC welterweight champion Kamaru Usman, finished the fight with a beautifully timed left hook.

Performance of the night: Geoff Neal took home an extra $50k for his brutal third round knockout victory over Vicente Luque in tonight’s UFC Vegas 59 co-main event (see that here)

Performance of the night: Jamahal Hill pocketed an additional $50k for his fourth round TKO victory over Thiago Santos.

Are you surprised by any of the performance bonuses handed out by Dana White and company following the conclusion of tonight’s UFC Vegas 59 event?