Super-fit Dana White hits back at ‘douche’ over steroid accusations

Dana White has never been fitter in his life, and he owes the change to ‘human biologist and mortality expert’ Gary Brecka, who initially diagnosed him with just 10 years to live. Not, as some online have suggested, to steroids.

According to White, Brecka took a full blood panel and quickly identified several worrisome health markers, including a triglyceride count above 750mg/dL. For reference, the normal range sits below 150, meaning the UFC president was one more UFC 279 incident away from a stroke.

Following Brecka’s custom tailored program, White has shed a ton of weight, revealing a solid set of six-pack abs which he showed off on Instagram. Of course it didn’t take long for someone to accuse him of being on the sauce, posting ‘Steroids’ in the comments.

White fired back, writing “The douche who said steroids is the type of person u can’t help. 10X health system is incredible and has changed my life.”

Regardless of whether White is indeed on performance enhancing drugs, it doesn’t take away from the fact that he was extremely unhealthy and looking at an early grave. Now he’s looking healthier than ever, and feeling amazing as well. 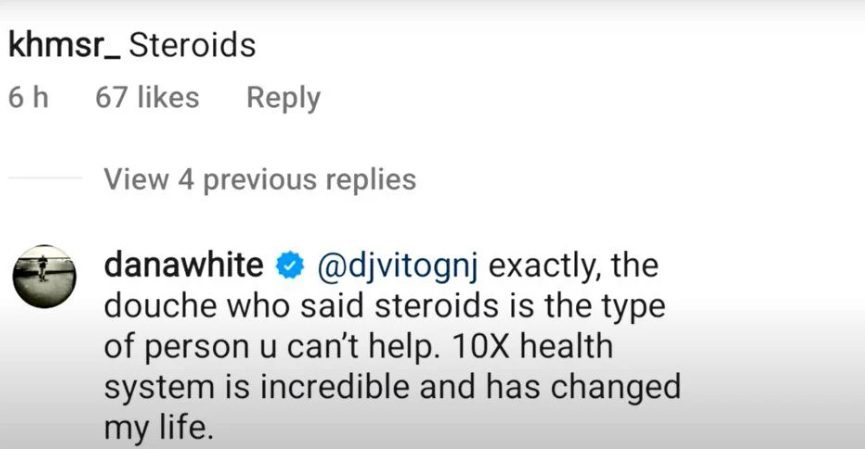 “I did everything he said, to the letter,” White told the Action Junkeez podcast. “I lost 30 pounds. My legs were so f***ed up 13 weeks ago, I couldn’t tie my shoes. Couldn’t bend over to tie my shoes, because my legs were f***ed up. I could barely walk some days. No more sleep apnea, I don’t snore anymore. Everything is gone in ten f***ing weeks. I’ve been working with doctors for 10 years that couldn’t do it.”

So whether White’s health improvements are a result of steroids or hGH or stem cells or peptides, you can’t argue with the end results. And so long as he’s not competing in the Olympics (or the UFC), does it matter whether his treatment would be banned by USADA?

Let us know what you think of Dana White’s transformation in the comments, PENN Nation!