Fernand Lopez reveals the threatening messages he received from rival manager and “owner of MMA media” Ali Abdelaziz over Slim Trabelsi dispute: “Release him or you’re going to get hurt”

Fernand Lopez just wants the entire story out there.

Recently, it was revealed that undefeated heavyweight prospect Slim Trabelsi signed with the Ultimate Fighting Championship and was set to debut at UFC 280 against Parker Porter. However, the fight won’t take place as Trabelsi was released after Lopez and his promotion Ares FC wouldn’t let him go, which he says was for good reason.

To begin, Lopez says he took in Trabelsi when he was just a wrestler and gave him a place to train, live, and fed him all for free.

“Well, everything started four years ago. He became the French National champ and went from his second gym and shows up to my gym,” Lopez said to BJPENN.com. “He says he has been struggling as the other gyms are just using him for wrestling and they don’t help him with MMA as he wants to start a career in MMA. That’s how we start and I told him he didn’t need to pay me because he didn’t have money and I’ll take care of him. He then signed a management deal with us and we will go from there. So, after he started training, he was very talented in wrestling but needed help with striking.”

After working with Trabelsi for years and getting him some fights, he was working on getting him into the UFC. Lopez had texted matchmaker Mick Maynard years before and the UFC executive was interested but needed Trabelsi to get some more fights on his record.

Unfortnately, still years later there was no UFC deal and Slim Trabelsi was disappointed and asked Lopez for his management release which Fernand Lopez accepted. The heavyweight contender then worked with a manager in Belgium but after that didn’t work out he once again went back to Lopez and said he regretted leaving and wanted him to be his manager again. The two then signed another management agreement in May of this year which Lopez provided to BJPENN.com. 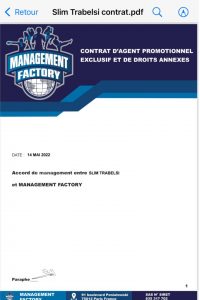 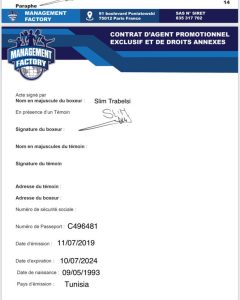 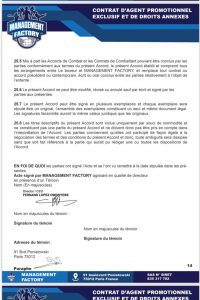 Although Lopez had a signed deal with Trabelsi, that still didn’t matter as he went behind his back and started talking to Ali Abdelaziz. After he won the Ares FC heavyweight belt, one of Trabelsi’s coaches told Fernand that Abdelaziz video called Trabelsi backstage and helped translate what was said.

“We signed a contract on May 14, 2022. We started to work together and very quickly I had a fight for him and he did great and then I had a second fight for him,” Lopez said about the contract. “The UFC was then coming to Paris on September 10 and I told Mick when you come to Paris, I want you to attend the show to meet Slim. I attended the show and Mick asked me who my guy is? I told him Slim. He started to laugh and I said what’s wrong? He said he had Ali on the phone and he said he has this guy and I should sign him and I said no way, I have been working with this guy for four years and I just re-signed him four months ago and everything is going smooth. He was training in my gym, I’m the one who manages him and there is no chance he has another contract.

“Mick said Ali said this was his guy. I told Mick I will forward you the contract and you will find out very soon who has the rights and ask Ali to give you his contract,” Lopez added. “After that, I didn’t hear from Mick and I was talking to Mick about my other guys in the UFC and I saw on Twitter, Brett Okamoto reported that Slim would be fighting at UFC 280 in Abu Dhabi. I was like f**k this is serious shit. I went back to Mick and he’s saying Slim listed Ali as his manager. I told Mick no, and he said I needed to talk to Slim. I said I’m not going to talk to Slim because as the Ares president before any guy moves from Ares he needs a release.

“It is legal in Europe, all the shows in France you can be the promoter and manager, Graham from Cage Warriors promotes and manages guys, it’s not something that happens in the States but is common here,” Lopez said. “In Slim’s case, I never delivered any release. His contract says if he doesn’t have any bout agreement signed he can go to another promotion but he still needs a release. But, because he was on the management contract with me and was going to screw me, Ali and Slim decided to bypass me and not get the release. One of Slim’s coaches is friends with me and he told me that Ali and Slim had a video call after he won the belt and spoke Arabic. He was saying don’t worry I got your back, Mick and Dana White are my men, don’t worry you will be in the UFC, f**k him, you don’t have to be scared of the management contract…

“Slim decided to just screw me and just never talked to me. I kept writing him after he won the belt, he didn’t answer me,” Lopez continued. “Mick is telling me I need to talk to Slim and Slim e-mailed Mick and told him my manager is Ali Abdelaziz which is not possible because I have the contract. Usually, when this happens the UFC won’t allow it and will go to the manager with the contract. At this point, Mick was very disappointed he called Ali and asked for the contract, Ali didn’t have one, he called me I sent him the contract and from there he told me he was releasing Slim.”

Once that was news was revealed, Fernand Lopez was obviously angry at what was happening and he figured that once Trabalsi was released it was going to be over.

Yet, that is when Abdelaziz began messaging and calling Lopez. The Frenchman recorded some of their alleged conversation and screenshotted text messages that he sent to BJPENN.com where Abdelaziz claimed that he owns MMA media which is why they are making Lopez look bad.

Abdelaziz: “Can I ask you a question? Why you think Damon Martin (of MMAFighting) don’t put story out? He has the story, I said hey, please don’t put (it out) I don’t want this s**t. Why (do) you think he don’t put it out? Because I don’t want it put out.”

Contrary to Ali Abdelaziz’s comments, Damon Martin did do a story on the Slim Trabelsi contract dispute 2 weeks ago which can be seen here. In addition, BJPenn.com reached out to MMAFighting who firmly denied the comments / allegations made by the Dominance MMA manager.

That wasn’t the end of the conversation either as Fernand Lopez says Abdelaziz allegedly went on to threaten him and told him he was going to get hurt if he didn’t let Trabelsi go.

“When Ali found out this was complicated that is the first time he called me. Hey Lopez can we talk let’s do this as gentlemen, why aren’t you letting the kid go? Let him go fight, I said what the f**k are you talking about. He was telling me this was a good kid and don’t ruin this kid’s dream,” Lopez said. “Like what the f**k are you talking about, I let this guy live in the gym, didn’t make him pay anything, gave him food. Ali was taking the best fighter I have, that I trained, promoted, and then he tried to take him right as he was about to get into the UFC. He doesn’t have any heavyweight prospects he can push which is why he wanted Slim. He then told me he will use every penny he has to hurt me.

“He then told me if I didn’t release him, I would hurt you… He then asked what I want to release him and I said two things, but one thing is priceless,” Fernand Lopez continued. “I want to send a message out there that anyone in my management that tries to screw me and not respect the contract won’t be tolerated anymore. I’ve lost too many fighters. The second thing is I wanted compensation and the compensation I thought was very fair is $90,000 over someone who would make millions over Slim’s entire career.

“Slim is someone I am pretty sure will become a champ in two or three years. After Ali didn’t agree to the $90,000 he then told me this is war and I’m from the streets and he will show me what that means,” Lopez continued. “We are now going to the court and I will prove to the court that I was right. I have also had other managers reach out to me and tell me not to let this fight go because Ali steals their fighters too. No one has the courage to speak up, I’m not scared so I stood up.” 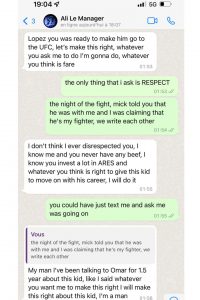 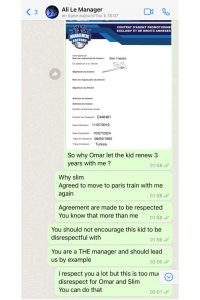 Fernand Lopez also shared text messages between him and Slim Trabelsi that were in French but shows Trabelsi agreeing to his deal as details of pay were seen.

Although this is a much longer dispute than Fernand Lopez thought, he says the plan is to now go to court and let the law settle this.

“I’m not trying to hold his career. I would’ve let Slim go if he was honest and told me he wanted to work with Ali, but the way he and Ali handled this going behind my back and lying to me, I don’t think that’s fair. I think this ends either two ways, Slim has two fights left on his ARES deal, and either he fights those out or we see what the court says,” Lopez concluded.