UFC heavyweight champion Stipe Miocic does not find the idea of a rematch with Francis Ngannou exciting, and would prefer a fresh challenge—perhaps even outside the sport.

Miocic and Ngannou first met in early 2018. On that night, Miocic successfully defended his title with a lopsided decision victory over his highly regarded challenger.

Since then, Ngannou has gone on to rattle off a quartet of knockout wins over Curtis Blaydes, Cain Velasquez, Junior dos Santos and Jairzinho Rozenstruik—all in less than three minutes combined. With this streak behind him, the Cameroonian-French knockout artist is widely regarded as the top contender in the heavyweight division, but Miocic doesn’t seem sold on that idea.

On Wednesday, Miocic partook in a brief Q&A with his followers on Instagram. When he was asked about a potential rematch with Ngannou, he admitted that he’d prefer a new challenge, such a professional boxing match. 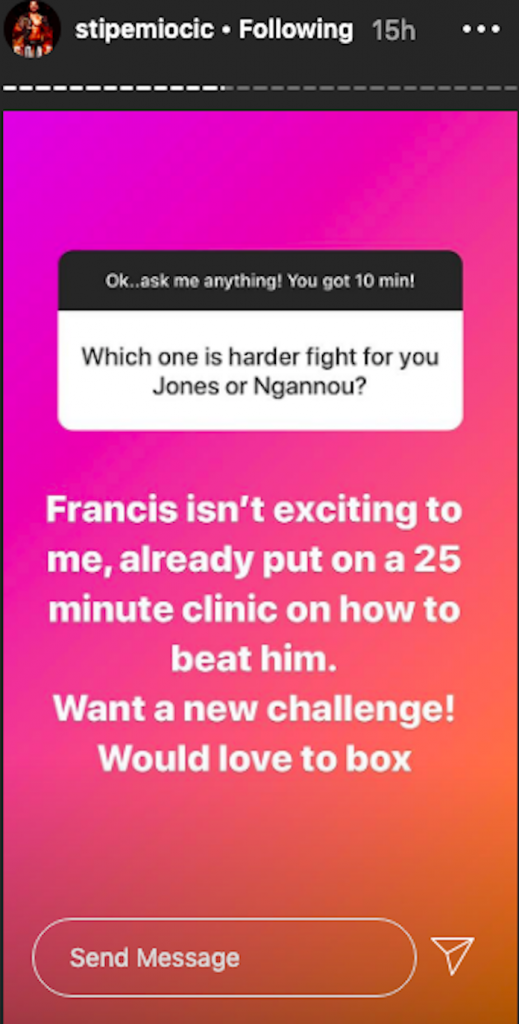 “Francis isn’t exciting to me, already put on a 25 minute clinic on how to beat him,” Miocic wrote. “Want a new challenge! Would love to box.”

This comment represents a bit of a change from Miocic who, earlier this week, credited Ngannou for the strides he’s made since their first fight.

“Ngannou has definitely shown a lot better stuff since the first fight,” Miocic told ESPN. “He’s knocking everyone out in the first round. He’s just on a tear.”

If Miocic doesn’t defend his title against Ngannou next, all signs point to a superfight with Jon Jones, who recently vacated the light heavyweight title to move up to heavyweight.

In his interview with ESPN, Miocic seemed somewhat indifferent to this potential matchup, at least when compared to a fight with Ngannou.

“[Jones has] got a great résumé,” he said. “But other guys have worked hard to get where they need to get. I’m not the matchmaker, so I can’t really say anything. I fight. If I was a matchmaker, I wouldn’t be fighting. I’ll do what the UFC decides.”

Who do you want to see Stipe Miocic fight next?