Robert Whittaker discusses his “next move” after defeating Marvin Vettori at UFC Paris: “I still think I’m the most dangerous man in the division”

Robert Whittaker is still hunting the chance to “gobble up that gold” after defeating Marvin Vettori in the co-main event of UFC Paris.

Whittaker (24-6 MMA) had entered tonight’s contest looking to rebound, this after suffering his second career defeat to Israel Adesanya in his most previous effort at February’s UFC 271 event. Prior to that setback ‘The Reaper’ had strung together three straight unanimous decision wins over opponents Darren Till, Jared Cannonier and Kelvin Gastelum.

Meanwhile, Marvin Vettori (18-6-1 MMA) had last competed eleven months ago where he scored a unanimous decision victory over Paulo Costa in a light heavyweight contest. Prior to that win, ‘The Italian Dream’ was also coming off his second career loss to reigning middleweight champion Israel Adesanya.

Tonight’s UFC Paris co-main event resulted in another strong showing from the former champion in Robert Whittaker. ‘The Reaper’ looked sharp in the standup department and was also able to showcase his world class takedown defense. Marvin Vettori looked visibly frustrated throughout the course of the fight, but still showed a ton of heart in defeat. 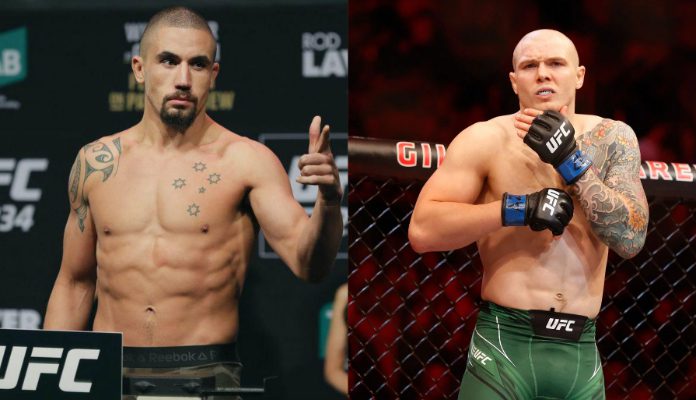 Following his impressive win over ‘The Italian Dream’, Whittaker spoke with reporters at the UFC Paris post-fight press conference where he made it clear that his focus is still on reclaiming the middleweight title.

“I’m a fiend for progress,” Whittaker said (h/t MMA Junkie). “I want to move forward. I’m hunting that gold still. So I’m always going to lurking around, just destroying who they put in front of me until I get a chance to gobble up that gold.”

Despite having suffered two losses to Israel Adesanya in the past, Robert Whittaker explained how his most recent collision with ‘Stylebender’ left him with a lot of confidence.

“He knocked me out the first one then the second one was a really close decision,” Whittaker said. “I’m not butt hurt about it, but on another day it could’ve been my win. Mentally that’s massive. It’s very hard to explain how it feels to get knocked out and lose your belt like that. It sucks. There’s a bit of a learning process afterward. A picking-up-of-the-pieces process. I conquered most of them.”

As for what’s next, Robert Whittaker plans to have his next fight take place in his backyard of Australia.

“I hear there’s rumors of an Australia card. I would love to fight in my backyard. I think that’s the next move for me.”

Who do you want to see ‘The Reaper’ fight next? Share your thoughts in the comment section PENN Nation!

This article appeared first on BJPENN.COM
- Advertisement -
This article appeared first on BJPENN.COM
Previous articleFrancis Ngannou reacts to Ciryl Gane’s knockout win over Tai Tuivasa: “It’s really hard to be impressed”
Next articleKevin Holland plans to closet Superhero cape after being arrested during a traffic stop in his hometown: “If you in Saginaw, I ain’t helping you man”