Gane was of course looking to rebound from his decision loss to ‘The Predator’ for the promotions undisputed heavyweight title. That setback to Francis Ngannou had snapped a ten-fight winning streak for ‘Bon Gamin’, with seven of those wins coming under the UFC banner.

Meanwhile, Tai Tuivasa (14-4 MMA) had entered today’s UFC Paris main event sporting a 5 fight winning streak, his latest being a second round knockout victory over Derrick Lewis. The hard-hitting Aussie has won all five of his most recent bouts by way of KO.

Today’s heavyweight headliner proved to be a wild back and forth affair. Ciryl Gane got off to a strong start in the contest landing numerous good jabs and low kicks in the opening round. However, in round two, Tai Tuivasa was able to find a home for one of his power shots that sent the former interim title holder crashing to the canvas. The Frenchman was able to recover from the big blow and went on to hurt Tuivasa with body kicks later on in the second frame. Then, in round three, Gane put Tuivasa away for good courtesy of a nasty uppercut and then some hammer fists (see that here). 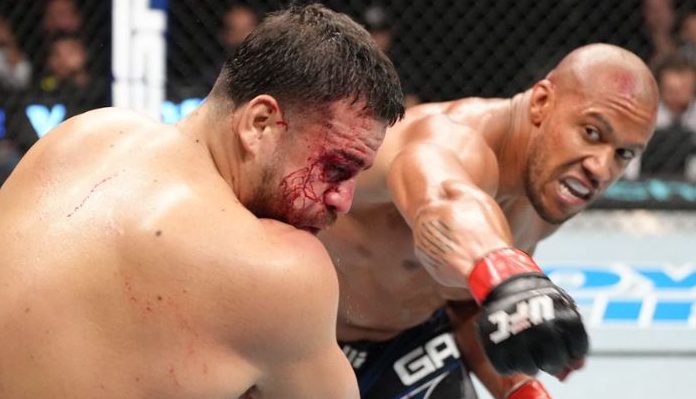 Following the conclusion of tonight’s event, Francis Ngannou spoke with reporters where he explained why it is hard for him to be impressed by Gane’s knockout win.

“That fight was very electric, though,” Ngannou said on the ESPN+ post-fight show (h/t MMAJunkie). “There were good actions in the fight. At some point, you see the fight was half-half and then it switched back to Ciryl’s side, which is what I thought. As far as distance, he’s good at controlling that and he was able to apply that in the fight tonight. You can see the body (shots), that’s what got him the victory. It was just like strategic, technical type of fight.”

“I know he’s is a great fighter. It’s hard to respond to that question for the guy that I beat – if I’m impressed with him. He’s here for a reason. I fought him for a reason because he was probably the No. 1 contender. Yes, he’s good, but I’m the champ. Yeah, so it’s really hard to be impressed.”

Francis Ngannou is expected to return in early 2023 against either Jon Jones or Stipe Miocic.