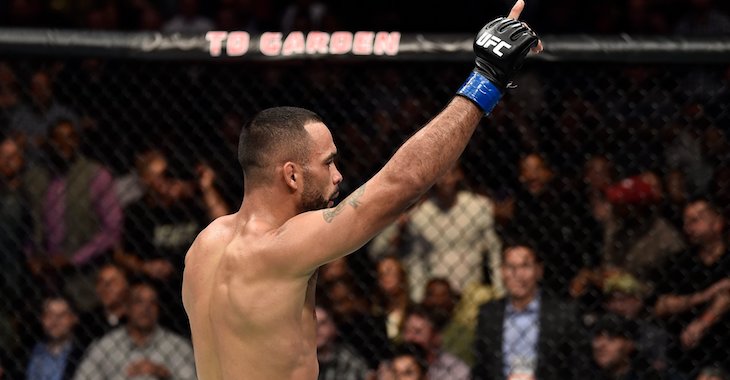 Moraes (23-7-1 MMA) had entered the bout looking to rebound this after suffering a devastating second round TKO loss to Cory Sandhagen in his most previous effort. Prior to that loss, ‘Magic’ had earned a split-decision win over Jose Aldo at UFC 245.

Meanwhile, Rob Font (17-4 MMA) was competing for the first time in exactly a year when he squared off with Marlon Moraes this evening. Font had earned unanimous decision victories over Sergio Pettis and Ricky Simon in his most previous efforts ahead of tonight’s event.

Tonight’s Moraes vs. Font fight did not get out of the opening round. Marlon Moraes took the early advantage with a pair of takedowns. However, Rob Font would eventually scramble to his feet and then proceeded to unload some crisp combinations. Those punches had ‘Magic’ badly hurt and Font promptly finished the former title challenger on the ground.

Check out how the pros reacted to Font defeating Moraes below:

HUGE opportunity for Font here. I can’t call it bc Font has really good striking and gas tank. Moraes will be smart to fight in bursts, like he normally does, and maybe capitalize with his BJJ advantage. #UFCVegas17

Wow. What a turnaround by font!!! #UFCVegas17 relentless finish !!

What a late stoppage #UFCVegas17

Congrats to Rob Font. That’s a big feather in his cap and puts him in the Top 5 immediately. This division is ON FIRE! Anyone can be the best on any given day! #UFCVegas17

Who would you like to see Rob Font fight next following his KO victory over Marlon Moraes this evening in Las Vegas? Share your thoughts in the comments section PENN Nation!