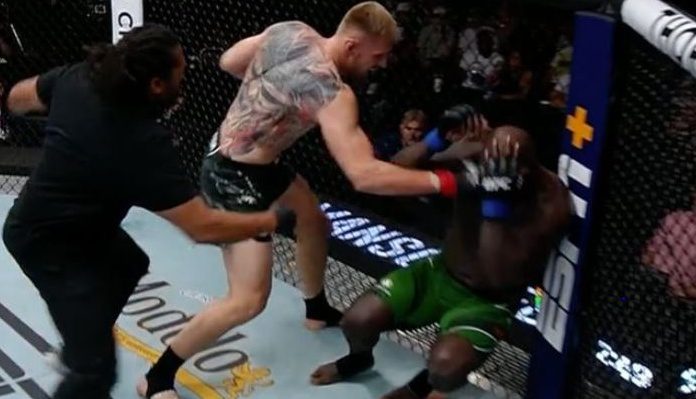 Tonight’s UFC Vegas 56 event was headlined by a heavyweight contest between Alexander Volkov and Jairzinho Rozenstruik.

Volkov (35-10 MMA) had entered the contest looking to rebound, this after suffering a first round submission loss to Tom Aspinall in his previous effort. Prior to that setback, the former Bellator champion had earned a decision win over Marcin Tybura at UFC 267.

Meanwhile, Jairzinho Rozenstruik (12-4 MMA) was returning to action for the first time since being defeated by Curtis Blaydes back at September’s UFC 266 event. That setback was preceded by a first round TKO victory over Augusto Sakai.

As many fans and analysts predicted, tonight’s UFC Vegas 56 main event did not make it out of the first round. Alexander Volkov was able to find success with his kicks in the early moments of the contest, this before ultimately putting Jairzinho Rozenstruik down with a flurry of punches. Referee Herb Dean quickly jumped in to wave off the fight and there was no dispute of any early stoppage coming from the corner of Rozenstruik.

Check out how the pros reacted to tonight’s ‘Volkov vs. Rozenstruik’ main event below:

Back in the win column for DRAGO! Way to close out the show! @AlexDragoVolkov #UFCVegas56 pic.twitter.com/ewRqssQHzp

That's a judgment call by the ref. Volkov was putting it on Rozenstruik, but a tough call to make with Rozenstruik never going down.

Either way, Volkov looked great, weathered the storm from Rozenstruik and turned the tables on him.

Who would you like to see Alexander Volkov fight next following his TKO victory over Jairzinho Rozenstruik this evening in Las Vegas? Did you agree with referee Herb Dean’s decision to stop tonight’s main event? Share your thoughts in the comment section PENN Nation!