Heavyweight kingpin Stipe Miocic is looking lean and mean ahead of his highly anticipated rematch with Francis Ngannou at UFC 260.

Miocic and Ngannou are set to square off for the UFC heavyweight title for a second time on March 27 in Las Vegas.

The pair first collided at UFC 220 in January of 2018 with Stipe Miocic looking to earn his third consecutive title defense. That evening in Boston, Miocic was able to weather an early storm from Ngannou and then went on to cruise to a unanimous decision victory. 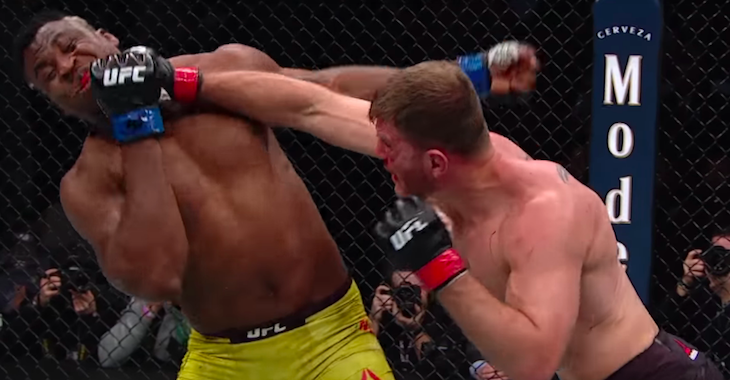 Since his first collision with ‘The Predator’, Stipe Miocic (20-3 MMA) has gone 2-1, with all three of those fights coming against Daniel Cormier.

Meanwhile, Francis Ngannou (15-3 MMA) has gone 4-1 since falling short in his first attempt at UFC gold. After a dismal performance against Derrick Lewis, the native of Cameroon has since rattled off four straight first round knockout victories. During that impressive stretch Ngannou has disposed of Curtis Blaydes, Cain Velasquez, Junior dos Santos and Jairzinho Rozenstruik.

Despite Ngannou’s extraordinary success as of late, Stipe Miocic remains confident that he will once again prove to be the “baddest man on the planet” at UFC 260.

The reigning UFC heavyweight champion recently took to Instagram where he shared a photo of himself looking lean and mean ten days out of his rematch with ‘The Predator’.

If that wasn’t enough to get you interested, the stacked main card also features the return of fan favorites Tyron Woodley and Sean O’Malley.

Do you think Stipe Miocic will be able to fend off Francis Ngannou for a second time when the pair square off later this month at UFC 260? Share your thoughts in the comment section PENN Nation!