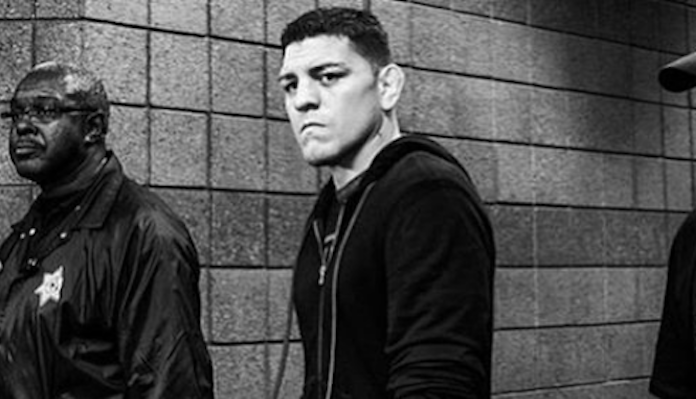 Diaz, who is one of the most popular fighters in MMA history, has not fought since a 2015 no contest with Anderson Silva, but began teasing a 2021 comeback earlier this year.

According to his manager, Kevin Mubenga, Nick Diaz has been training consistently and is looking to get back in the Octagon very soon.

“The guys have been training, he has been training for at least four months straight… We were two months in by that time, that was August or September where he was going two months hard,” Mubenga said about Nick Diaz on his Fight Game Chronicles podcast. “Now, we are in December, so, he is four or five months in. But, he took a little break because he didn’t want to train and over exhaust it. Took a little break last month and now we are going to pick it back up in December. And, go into the New Year with a deal done and make sure the money is right and the opponent is right and we will be able to move forward. That is all it is.”

Jose Garcia, the athletic recovery coach of both Nick Diaz and his younger brother Nate, recently took to Instagram with the following photo the shredded 37-year-old.

“The general is well some y’all gossiping hoes out there need to quit that n chill.. Nick Diaz is locked out of his social network. Not active in his social network due to that matter..
YALL lames needs to stop praying for Nick Diaz downfall.. He has a couple of people on his “PEOPLE TO KILL “ list for his UFC return. Thank you for all your concerns for my brother. He is living a life better than most of us….. we are currently working to get Nick back on line #wardiaz Diaz army stay ready When he calls it’s war.” – Garcia captioned the photo.

While the Diaz camp is clearly confident that fight fans will see Nick return to the Octagon this year, UFC President Dana White is not so optimistic.

“Everything that I see from Nick Diaz doesn’t look like he wants to or is ready to compete in this sport,” White said (via MMA Junkie). “Even Jon Jones, as good as Jon Jones is, you have to be 100 percent mentally, physically and emotionally ready to train, be ready for this, and fight. I don’t think anyone should want to see Nick Diaz fight.”

“Nick Diaz has been in a lot of wars, he’s accomplished a lot of great things in his career, he’s made a lot of money, he’s obviously super-famous. He’s gotten everything you could hope to get out of fighting. I just don’t know why, when I see his Instagram, why he would come back.”

Who would you like to see Nick Diaz fight if he does return to the cage in 2021? Share your thoughts in the comment section PENN Nation!