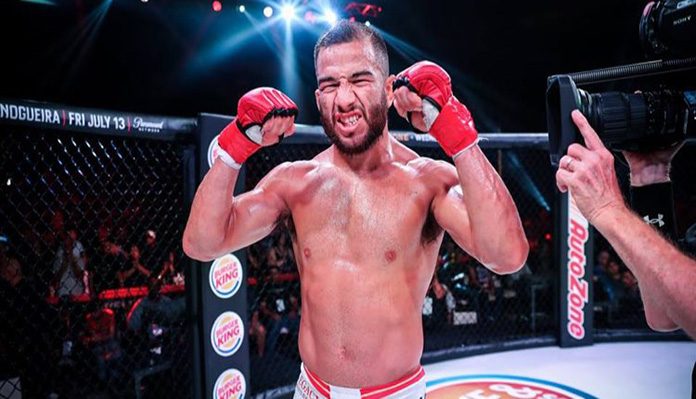 A super-fight between Bellator champion, Juan Archuleta and Rizin champion, Kyoji Horiguchi has been discussed for more than two years.

To all the Japanese mma fans be ready! We are going to sell out the TokyoDome when @kyoji1012 and I fight! It’s going to be a battle you don’t want to miss! @TheDiceTeam @rizin_PR @BellatorMMA

Archuleta began publicly courting a scrap with the Japanese icon back when Horiguchi held the 135lb belt in Bellator.

Horiguchi was forced to vacate both of his world titles due to a horrific knee injury suffered in late 2019. The 30-year-old completed a glorious comeback for Rizin on New Year’s Eve, when he knocked out Kai Asakura in the first round to reclaim the bantamweight strap. It was an impressive performance.

Rizin is looking to do a big show in March and Archuleta is keen to test himself against the rejuvenated Horiguchi,

“It’s like fighting Cain Velasquez or Jon Jones for the lighter weights so that’s what I’m looking forward to,” ‘the Spaniard’ said in an interview with SCMP MMA, and added,

“I’m fighting a guy who was the first person to simultaneously hold two big promotion belts in Bellator and Rizin.”

Both fighters have expressed an interest in the fight, and it looks bound to happen sooner or later.

Bellator and Rizin began cross-promoting shows in 2018. The door is certainly open for Archuleta to come to Japan and challenge Horiguchi in Rizin, and he’s grateful for the faith that Bellator CEO, Scott Coker has in his fighters,

“The cross-promotion stuff is awesome,” Archuleta said, and continued, “you literally have your boss having enough confidence in you to go to another promotion and say ‘hey! This is my number one fighter, who’s your number one fighter?’ And they put two champions in the ring.

“It gives me the jitters thinking about it. I win this title? I’ll fight whoever Japan has me next in line to defend the Rizin title against.”

Who do you have winning in a super-fight between Archuleta and Horiguchi?