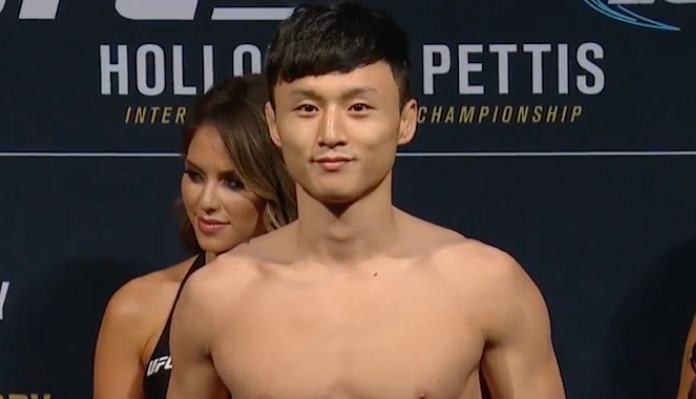 Doo Ho Choi made his highly-anticipated return to the Octagon at today’s UFC Busan event against Canadian, Charles Jourdain.

It was his first fight since January of 2018 as he has been in the process of finalizing his mandatory military service and can’t leave South Korea. But, with the card being in his home country he was eligible to compete.

Unfortunately for Choi, his return did not go as planned as he suffered a second-round TKO loss to Jourdain.

In the fight, he was having success and appeared to rock Jourdain several times and even dropped the Canadian. Yet, the “Korean Superboy” got caught, dropped and finished with under a minute to go. To make matters worse, it was revealed he broke his forearm in the process.

"The Korean Superboy" Choi Doo Ho broke his forearm in the first round of his fight with Charles Jourdain at #UFCBusan. X-ray below
📷 Team MAD IG pic.twitter.com/b7UYKPfP6z

As John Hyon Ko, who is in Busan, reported, the broken forearm happened in the first round of the fight.

It’s unknown what exactly caused the broken forearm but he did block a few kicks with it and threw some spinning backfists that may have done the job.

It is Choi’s third loss in a row and also his second straight TKO loss. In the fight before, Jeremy Stephens knocked him out. Although he is on a skid, he does put on entertaining fights as his past three bouts have been ‘Fight of the Nights’ and for the past five scraps, he has earned either a FOTN or a ‘Performance of the Night’ bonus.

Korean Superboy may be away from the Octagon for the foreseeable future as he needs to heal his forearm and then complete his two-year military service.

What do you make of Doo Ho Choi breaking his forearm in his fight with Charles Jourdain? Sound off in the comment section, PENN Nation!