UFC featherweight champion Jose Aldo told Henry Cejudo, who he called a ‘gnome,’ that he has accepted the challenge of fighting him.

Check out what Aldo had to say to Cejudo in a humorous social media post. 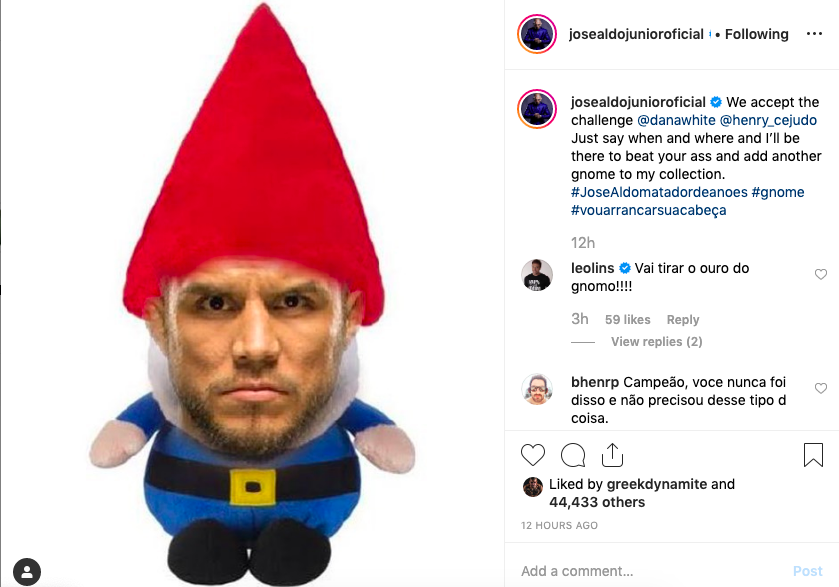 “We accept the challenge @danawhite @henry_cejudo Just say when and where and I’ll be there to beat your ass and add another gnome to my collection. #JoseAldomatadordeanoes #gnome#vouarrancarsuacabeça”

Aldo recently said that he wants to drop down to 135lbs to fight Cejudo for the UFC bantamweight title. Cejudo has responded to Aldo, calling him “Waldo.”

It’s not a sure thing that the UFC plans on booking this fight, however. UFC president Dana White said that Aldo texted him asking for the fight, and White said he’s intrigued by the thought of Aldo in another weight class. But after this week’s episode of the Contender Series, White told the media he doesn’t think it’s safe for Aldo to cut all that weight.

Aldo (28-5) is coming off of a unanimous decision loss to Alexander Volkanovski in a title eliminator at UFC 237. Prior to that, he had won two straight fights by knockout over Jeremy Stephens and Renato Moicano. However, the loss to Volkanovski has pretty much eliminated Aldo from featherweight title contention for the moment.

Cejudo (15-2) is riding a five-fight win streak at the moment and is both the UFC flyweight and bantamweight champion. In his last fight, Cejudo won the vacant bantamweight title with a brilliant TKO win over Marlon Moraes. Prior to that he had defeated TJ Dillashaw by knockout and Demetrious Johnson via split decision at flyweight.

However, White recently said he wants Cejudo to fight Joseph Benavidez next. So it remains to be seen what the champ-champ will do next, but right now he’s currently healing up from injuries anyways.

Is Jose Aldo vs. Henry Cejudo a fight that you want to see?