Marcelo Ribas, the father of UFC women’s strawweight contender Amanda Ribas, got a tattoo of his daughter celebrating her first UFC win.

In June 2019, Ribas made her UFC debut when she submitted Emily Whitmire for her first win inside the Octagon. Her father, Marcelo Ribas, was so moved by the moment that he decided to get a tattoo to commemorate the moment. MMAFighting.com’s Guilherme Cruz spoke to the elder Ribas, who explained his decision to get the tattoo while providing a photo of his ink. It’s also worth pointing out that in addition to being Amanda’s father, he is also her coach. 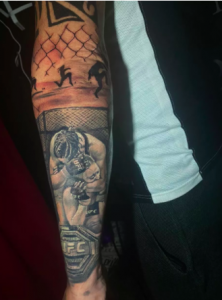 “This tattoo is very important for me. It was my biggest accomplishment professionally speaking because I almost had three shots at having someone in the UFC and it never worked, and all of a sudden Amanda got in. Her first fight was two years after that doping case and everything we went through, it was very important, so I decided to eternalize that victory on my arm — the night she showed the world who she was,” Marcelo Ribas said.

In addition to the tattoo of his daughter, you can see a tattoo of the UFC belt, as that’s Ribas’ goal in 2021. Since making her UFC debut in 2019, Ribas is 4-0 in the UFC with wins over Paige VanZant, Randa Markos, Mackenzie Dern, and Whitmire. She has become a fan favorite, especially after beating VanZant at UFC 251.

She is ranked in the top-15 of the UFC’s 115lbs division and appears to have all the skills, along with the personality, to become a star in this sport. Ribas is next set to return to the Octagon at UFC 257, with her father/coach cheering her on. She takes on Marina Rodriguez at UFC 257 in a battle between two Brazilians on the rise.

Where do you think Amanda Ribas will be in the UFC strawweight division by the end of 2021?