“Dana White and the UFC just blocked Georges St-Pierre from fighting Oscar De La Hoya. It is a big payday for GSP and both he and Oscar’s dream to fight each other. Dana would rather hold back those who put the UFC where it is and why? Snoop Dogg, Jake Paul, Mario Lopez, Teofimo Lopez, Kevin Iole. I’ve tried to call and text Dana at least 5 times to make it work for both parties not even the courtesy of a return call. And he’s trying to get Jake Paul to fight for the UFC now? Making him offers? Just hurting his own people and chasing ours.” – Kavanaugh wrote on Instagram.

Dana White would later address the accusations by stating the following:

“Oh my god. Don’t even ask me about these idiots. Who gives a sh*t. Does anybody give a sh*t? I don’t give a shit what they think. You think I care what Triller thinks? I don’t even take their calls. This idiot calls me every day, texts me every day. ‘Please answer my call, please talk to me, why won’t you talk to me?’ Cause I don’t give a f*ck about you. Do your thing. Leave me alone. Go do whatever it is you’re doing. Knock yourself out, I could care less. I have no interest in talking to any of those idiots. They can do their thing. Do you thing. Stop talking about me. What do you give a sh*t what I’m doing? Do your thing,” White said. 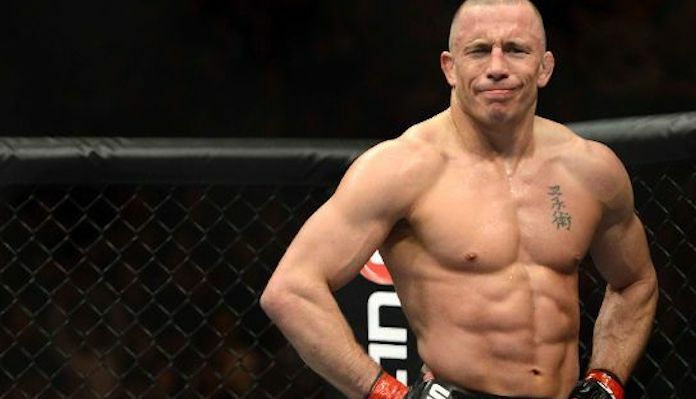 Georges St-Pierre would later confirm that the UFC intervened and prevented him from boxing De La Hoya.

“I understand that Dana didn’t want me to fight. However, it would have been fun. Because my career as a professional fighter, to become the best in the world in mixed martial arts, is done. I’m turning 40 years old tomorrow; I’m going to be 40 years old. It’s a young man’s game,” St-Pierre said.

“However, to rather fight a boxing match under the rules that Triller put on against the legendary Oscar De La Hoya? For me, it would have been a dream come true, because he is my second favorite boxer of all time, behind Sugar Ray Leonard,” GSP said. “Plus, a lot of the money made would have been given to charity. So it would have been for a good cause, just to show that we don’t take ourselves too seriously. And it would have been serious competition because you say, I play basketball, I play hockey, but you don’t ‘play’ fighting. It would have been fun.”

While GSP’s recent comments suggest he has already moved on from the idea, Oscar De La Hoya is now willing to give in so easily.

The former boxing champion took to social media on Friday where he challenged Dana White to a fight, suggesting that he will kick his ass and then fight a real man in GSP.

.@danawhite Quit blocking@GeorgesStPierre’s chance to fight.  How about we get into the ring first little B*#ch then after I kick your ass, I’ll fight a real man #DeLaHoyaGSP #LetGSPFight pic.twitter.com/sPKeXpHDDW

“Dana White quit blocking Georges St-Pierre’s chance to fight.  How about we get into the ring first? Little B*tch. Then after I kick your ass, I’ll fight a real man.” – De La Hoya wrote.

Oscar De La Hoya (39-6) has not competed since 2008 where he suffered a loss to fellow boxing legend Manny Pacquiao. With that said, the 48-year-old looks to be in solid form ahead of his proposed comeback.