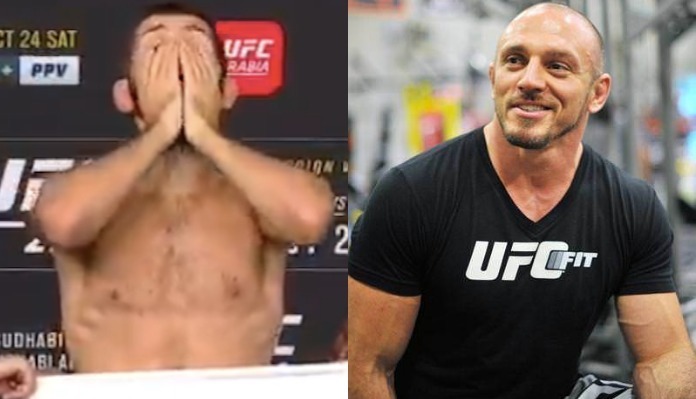 MMA nutritionist Mike Dolce claims something “very disturbing” happened when Khabib Nurmagomedov stepped onto the scale for his UFC 254 fight.

Nurmagomedov, the undisputed UFC lightweight champion, will defend his title against Justin Gaethje in the UFC 254 main event on Saturday. On Friday, he and the other fighters on the bill stepped onto the scale to weigh in for their imminent contests.

Nurmagomedov was the first fighter on the scale for the weigh-ins, and successfully hit the 155-pound limit, but looked quite depleted on the scale, and also quite relieved once he’d hit his mark. There has also been speculation among fans on social media that the official operating the scale made an error—potentially intentionally—that allowed Nurmagomedov to hit his mark.

Dolce, one of the foremost nutritionists in the sport, is among those who believes something fishy happened.

“Something very disturbing happened at the weigh-ins for UFC 254, Khabib Nurmagomedov vs. Justin Gaethje,” Dolce said on his YouTube page (via MMA Junkie). “What happened? When Khabib stepped on the scale, the inspector – either through sheer incompetence or (intentionally) – made a massive mistake that’s maybe worth tens of millions of dollars.

“Unfortunately, in my expert opinion, I do not believe that Khabib would have made the 155-pound weight class limit on this attempt. Now, Khabib was the first man on the scale and would’ve had time to cut that additional weight if he was physically able, but when you look at his language I will explain … why he wouldn’t have been able to do it.”

Dolce then claimed that the official operating the scale at the UFC 254 weigh-ins didn’t allow the scale to balance before reading Nurmagomedov’s result.

“(The beam is going in an) upwards trajectory, and it has to balance,” Dolce said while watching a replay of Nurmagomedov on the scale. “It’s going up. That means he’s heavy, and (the official) wipes it there as it’s still on its way up. It doesn’t bounce and doesn’t stabilize in the center. That’s not correct.”

Do you think an error was made when Khabib Nurmagomedov stepped on the scale this morning?