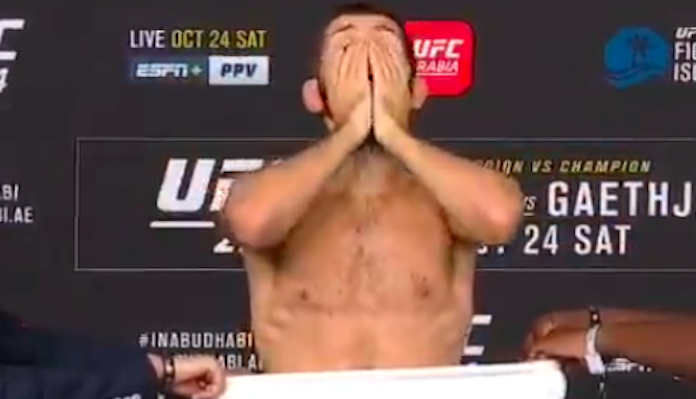 UFC lightweight champion Khabib Nurmagomedov needed to strip down behind a towel to make weight for his upcoming fight.

Nurmagomedov, the undisputed UFC lightweight champion, is set to defend his title against the division’s interim champion, Justin Gaethje, in the main event of UFC 254 this Saturday night on Fight Island.

On Friday morning, Nurmagomedov and the other stars of the UFC 254 stepped onto the scales to weigh in for battle. While the champion ultimately it the 155-pound limit, it did not look easy for him, as he needed to ditch his clothes, and looked very relieved once his weight was official.

Unsurprisingly, fans on social media quickly began to suggest that Nurmagomedov might have endured a difficult weight cut, and speculate what that could mean for his UFC 254 performance.

Whatever the case, the champ hit is mark, and the fight is now official.

Khabib Nurmagomedov is currently 28-0 as a professional mixed martial artist. He captured the UFC lightweight title in early 2018, when he defeated last-minute replacement opponent Al Iaquinta in a fight for the vacant throne. Since then, he’s defended the title twice: first with a submission of Conor McGregor in late 2018, then with a submission of Dustin Poirier in September, 2019. Other highlights of his record include wins over top-flight foes like Rafael dos Anjos, Michael Johnson and Edson Barboza.

That Gaethje vs. Ferguson fight ended up happening in May. In a noteworthy upset, Gaethje won by fifth-round TKO to capture, claiming the interim title and setting himself up for a blockbuster title unification fight with Nurmagomedov.