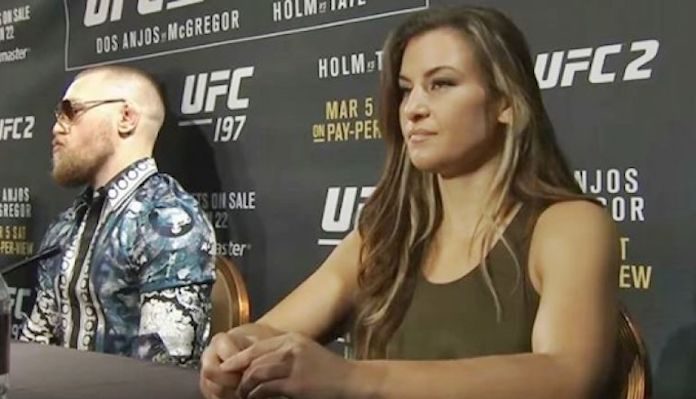 A different sounding version of Conor McGregor has appeared in the lead-up to his fight against Donald “Cowboy” Cerrone at UFC 246, and that version was on full display during Wednesday’s pre-fight press conference.

McGregor did not come into the press conference with a ton of trash talk or animosity towards Cerrone, instead he chose to pay respect to his upcoming opponent and credit him for becoming a family man and his activity inside the Octagon. This version of McGregor’s persona has caught the attention of many, including former UFC women’s bantamweight champion, Miesha Tate.

During her show on MMA Tonight on Sirius XM’s Fight Nation, Tate discussed the new sound of McGregor, saying the former champion sounds more grounded in his return.

“I think he’s lacked focus at one point in his career but it sounds like he has turned that around, that he learned from it, that he realized after a loss that he wasn’t just invincible, he couldn’t do all those things and still be winning, he had to go back to his roots. It sounds like he’s more grounded,” Tate said.”

According to a report from the New York Times, McGregor is currently being investigated for sexual assault, though he has not been charged. When a reporter asked him about those allegations at the press conference, fans were quick to boo while Cerrone and Dana White came to the defense of McGregor. With those questions surrounding him right now, Tate believes McGregor has been humbled.

“I think it’s partially why we’re seeing the taming of Conor,” Tate said. “I don’t think you can have those kind of allegations and still come across as brash and immature and that he doesn’t care. He’s showing a more sentimental, like a softer side. He’s showing a compassionate side. I think when you have those allegations looming over your head, it’s got to scare you a little bit and it’s got to humble you a little bit. Not just the loss but the type of things that Conor has done, those are bigger stories than his fight career has been.”

Although there’s no questioning the current star power of McGregor, Tate believes he’s doing some recovery of his public image.

“I mean, is he relevant? Yes. But has his brand been damaged and tarnished in a kind of way? Absolutely,” Tate said. “And now I think he’s trying to do some recovery on that process. I don’t think the old Conor McGregor fares as well with the fans. It’s not what they want to see in a moment where they haven’t been liking what they’ve been seeing from Conor. They want to see the side that was before, they want him to get back on the winning track.”

While he has a very respected and game opponent in front of him at UFC 246, Miesha Tate believes that if he is victorious over Donald Cerrone, McGregor could slowly start to bring back his trash-talking ways.

“If he beats Cowboy, I think whoever he fights he will slowly start to integrate his trash-talking again because the brand will have made some turnaround,” Tate said. “But right now, he’s smart. This is exactly how he needs to handle his comeback and I think he needs to be candid and open, and continue as he has been with the story of Conor McGregor and his comeback.”

What do you think of these comments from Miesha Tate?