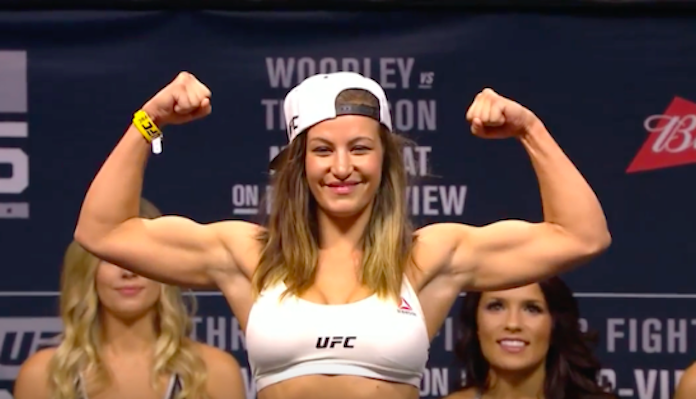 Miesha Tate is back.

The former UFC women’s bantamweight champion is ending her retirement to fight Marion Reneau on July 17. The event does not have a name and no location was announced. ESPN was the first to report the news of the booking. It’s uncertain if Tate will make another run or of this will be a one-off fight.

“My heart is full of passion, the fire has been lit!” Tate told ESPN, via text message. “The sport has been calling for me, it’s time I answer.”

The news no doubt a surprise given Tate has been retired for over four years now. She has also been working as the Vice President at ONE Championship but recently has been posting photos of her in the gym training. She has also hinted at doing grappling competitions, but it appears she wants to get in one more fight and try to end her career with a win.

Miesha Tate has not fought since she UFC 205 where she suffered a decision loss to Raquel Pennington in her then-retirement fight. Before that, she was submitted by Amanda Nunes at UFC 200 to lose her bantamweight title. The now 34-year-old won the belt at UFC 196 with a submission win over Holly Holm. Tate also holds notable wins over Jessica Eye, Sara McMann, and Liz Carmouche as well as having the legendary rivalry with Ronda Rousey but lost both fights by submission.

Marion Reneau, meanwhile, is coming off a decision loss to Macy Chiasson at UFC Vegas 22 last weekend. It marked her fourth loss in a row as during the run she also lost to Raquel Pennington, Yana Kunitskaya, and Cat Zingano. If she can beat Miesha Tate, it would be one of the biggest wins of her career.

Who do you think will win between Miesha Tate and Marion Reneau? And, are you surprised Tate is making a comeback?