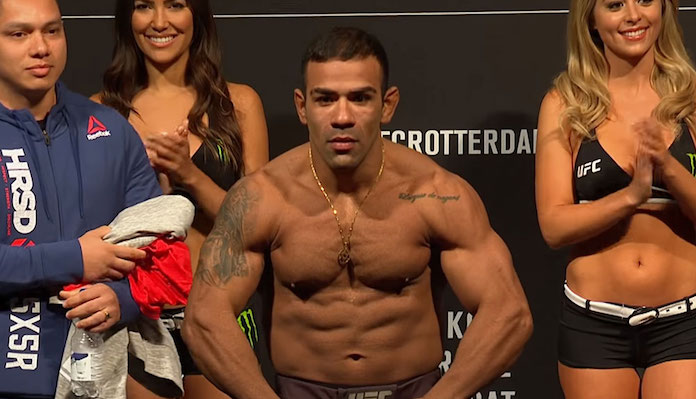 UFC welterweight Michel Prazeres has accepted a two-year sanction by USADA for violating the UFC Anti-Doping Policy after testing positive for banned substances.

USADA revealed on Tuesday the suspension to Prazeres, retroactive to last March, in a press release. Check it out below in full via the USADA website.

“USADA announced today that Michel Prazeres of Belém, Brazil, has accepted a two-year sanction for a violation of the UFC® Anti-Doping Policy after testing positive for a prohibited substance.

Prazeres, 38, tested positive for exogenous boldenone and its metabolite 5β-androst-1-en-17β-ol-3-one as the result of two out-of-competition urine samples he provided on March 9, 2019. Confirmation of the positive test was achieved through additional analysis using the sensitive isotope ratio mass spectrometry (GC/C/IRMS) method, which reported laboratory results consistent with the exogenous origin of boldenone. Boldenone is a non-Specified Substance in the class of Anabolic Agents and is prohibited at all times under the UFC Anti-Doping Policy and UFC Prohibited List.

Prazeres’ two-year period of ineligibility began on March 9, 2019, the date his positive samples were collected.”

Prazeres (26-3) has been in the UFC since 2013 and this is his first violation of the USADA policy. The Brazilian has an overall record of 10-3 in the UFC, with notable wins over Gilbert Burns, Zak Cummings, Josh Burkman, Des Green, and Mairbek Taisumov. His three losses in the UFC came against Kevin Lee, Ismail Naurdiev and Paulo Thiago in his promotional debut.

At age 38, this suspension will knock Prazeres out of competition until he is 39 as it expires next March. The UFC may very well opt to just release Prazeres given his age and the fact the UFC welterweight division is so deep anyways. If he is released, he could possibly wind up in Bellator or PFL down the road, or potentially take his talents overseas to Russia or Japan before his suspension ends.

What do you make of this suspension to Michel Prazeres?