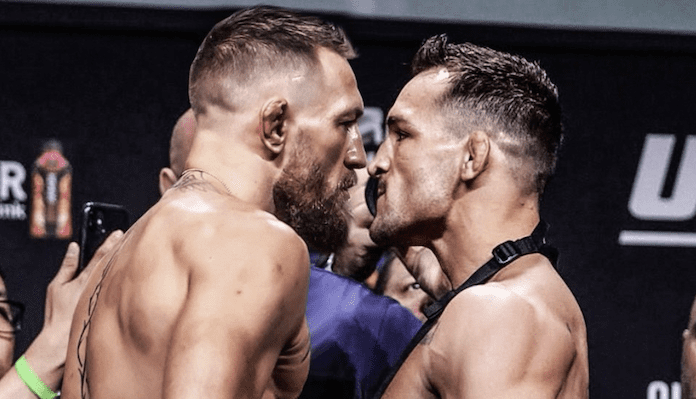 Michael Chandler is still focused on fighting Conor McGregor his next time out.

In speaking with ‘TMZ Sports’, Chandler opened up about what’s next:

Continuing, when asked about if the McGregor fight makes sense to be top of his list Chandler said (h/t MMAFighting):

“I think it does. Obviously I think the biggest thing for Conor is timeline. The guy snapped his leg. It wasn’t a small injury. It required surgery, maybe multiple surgery, a titanium rod going in and all that stuff. As you’ve seen my pursuit of the Conor McGregor fight, the Chandler vs. Conor fight, in my pursuit I’m not going to be throwing stones at the guy. The guy completely shattered his leg and it was literally just a year ago. Have people come back quicker than he’s going to come back? Yes, probably, but we don’t know the extent of Conor’s injury. All we know is he snapped it last July. We’ve seen him post some stuff on social media, we’ve seen he’s getting back to training, but the sport is better and the organization and the lightweight division is better when Conor McGregor is a part of it. That being said, he needs to come back at the right time.”

Believing it would be the ‘biggest fight in MMA’, Michael Chandler continued:

Confirming he would wait until January or February if Conor can get clearance to fight, Chandler concluded:

“I think if Conor came out tomorrow, or his management or his doctor, came out tomorrow and said Conor will definitely be back January for sure, and then subsequently he comes out and says he wants to fight me, I’ll definitely wait until January or February. But at this point if he’s not coming back and there’s no guarantee that that fight is happening to put those pieces of the puzzle together, to make sure those two stars align, at the right time at the right place, I would probably have to move on. But I think me and Conor happens no matter what, eventually. It’s going to happen down the line.”

Would you like to see a Conor McGregor vs Michael Chandler match-up next?